Russell hits out at Red Bull and Ferrari 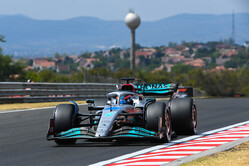 While looking forward to the summer break, George Russell is also anticipating the implementation of the measures on bouncing and flexing floors set to be introduced at Spa.

The directive was first issued in the wake of the Azerbaijan Grand Prix, following complaints from numerous drivers and the sight of Lewis Hamilton having great difficulty extracting himself from his car.

As ever, the move caused disagreement between the teams, and while the introduction of the metric by which the bouncing will be measured was delayed, attention then focussed on the changes to the rules surrounding floors set to be introduced next season. Again, there was division among the teams.

From the outset, Red Bull and Ferrari argued that the measures were being taken to benefit Mercedes, the team most affected by the bouncing phenomenon, arguing that in introducing the metric was punishment for those teams that got it right.

While the argument over next year's rule change continues, with at least six teams calling on the FIA to move on, claiming that the bouncing will effectively 'sort itself out' as the engineers get to grips with the new ground effect rules, the FIA and Mercedes insists that the rule change is all about safety.

However, in the short term, looking ahead to Spa and the introduction of the bouncing metric and crackdown on flexing floors, speaking in the wake of the Hungarian Grand Prix, George Russell admitted that the move should benefit his team.

"There's no doubt we are making progress as a team," he told Sky Sports. "At the start of the season, we were finishing a minute behind the lead. Now it's ten seconds in the last couple of races. If we can continue on that path, we will definitely be in the hunt.

Spa is going to be interesting," he continued. "There's some changes to some regulations which may bring other teams towards us.

"I think we, as a team, have a lot of confidence and faith in ourselves that we are doing a great job and there's no reason why we can't be in that mix," he added.

"There's no doubt Ferrari and Red Bull have pushed the regulations in that regard and we have respected it as the regulation was intended.

"But there's no guarantees that it will bring them closer to us," he admitted. "We know, if it was on our car, it would make us slower. Every car is different, but it's not going to help them, that's for sure."

"I think the TD isn't really the issue," said Christian Horner on Saturday. "I think the TD, I'm not expecting any... for us it's not a major issue," he reiterated. "I think the bigger discussion is about a potential regulation change for next year that, here we are potentially in August, with what could be a major redesign of the car if the size of the floor were raised by the 25mm that they're talking about, and other aspects. I think that's a far bigger discussion. And I think one would say that that wasn't purely on safety.

"I think that a compromise needs to be found," he continued. "But it's a little bit of a tricky one because that regulation change is massive. It changes the whole concept of the aerodynamics. And it's a tricky one for the FIA, because where do you draw the line?

"While yes, there is a safety obligation of the FIA to look into, where does that line stop? Because you know, do we need to seek permission to go from slicks to wet or wet to slicks? If we hit a kerb or not. You've just got to be very careful about the unintended consequences of these things. And, of course, the caveat is safety and safety is of paramount importance to everybody - but it has to be taken into context.

"I'm certain, if you've just left the regulations alone, the engineering capability in this pit lane is such that it wouldn't really be an issue next year. But I think there is room for a compromise. The FIA President is personally getting involved. I know he's spoken to, I think, all of the drivers. He's speaking to all of the teams and hopefully clarity on that, certainly for next year, will be forthcoming in the next few days."

Meanwhile, at Mercedes, Toto Wolff was hinting that Charles Leclerc's off in France was not so much about driver error but porpoising as he stressed the need for the 2023 rule change on safety grounds.