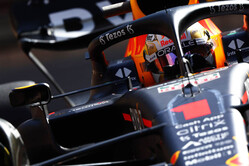 Max Verstappen and Sergio Perez have both taken on new engines for today's Hungarian Grand Prix.

At sister team, AlphaTauri, Pierre Gasly has also taken on a new power unit and will start from the pitlane.

Both Red Bull drivers have used two internal combustion engines to date, along with two turbochargers, MGU-Hs and MGU-Ks, and while Verstappen has used just one energy store and control electronics, teammate Perez has used two of the latter.

In terms of exhaust systems both are on four.

With Gasly qualifying 19th, AlphaTauri took the opportunity to fit a new engine to his car also, however as he has already exceeded his permitted allocation he must start from the pitlane.

The Hungaroring is notorious for its lack of overtaking opportunities, yet Red Bull may well fancy its chances in terms of strategy today, especially as both drivers had qualified so poorly.