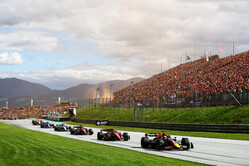 With no mandatory pit stops, other than the tyres one chooses there is little in the way of strategy as far as the Sprint is concerned, instead it's a case of a mad rush to the first corner and an equally mad scramble for the next few corners.

For the most part the Sprints have been disappointingly processional, but with points for the first eight and this being a circuit on which overtaking is possible, that could all change today.

However, everyone is aware that the big prize is tomorrow, and therefore while the likes of Haas and Alfa Romeo might see this afternoon a gamble worth taking, the big guns, despite the fact that the Sprint decides tomorrow's grid, will be keen to keep out of trouble.

None more so than Mercedes of course, having suffered two crashes yesterday, necessitating a change of chassis for Lewis Hamilton.

The Ferraris have extraordinary pace here, and while Max Verstappen will be keen to take the fight all the way to the Maranello squad, he will be aware that it is tomorrow that counts.

With that in mind however, one driver who really needs to get his elbows out is Sergio Perez, who, following his post-qualifying penalty, starts the Sprint from 13th on the grid. Other than his own title aspirations, the Mexican will be needed tomorrow for the fight with Ferrari, and possibly Mercedes, so it is essential that he can get as far up the field as possible.

McLaren really needs a boost, especially Daniel Ricciardo, but on the evidence thus far it looks likely to be another of those 'difficult' weekends for the Woking outfit.

All in all, the Sprint is pretty much a crash, bang, wallop affair that doesn't really need to be put under too much scrutiny, so let's just sit back and hope that the drivers can put on a decent show... of course, after last week's Battle of the Titans we are pretty much spoiled, but who is to say that Max and the boys can't give us another wee taster.

The pitlane opens and the drivers begin to make their way to the grid.

Asked his plan for the race, Norris grins and replies: "Basically my plan is: I've got a rope, I'm attaching it to the Red Bull of Perez in front of me and I'm following him all the way through." No doubt teammate Ricciardo has an even longer rope.

As a reminder, Verstappen starts from pole, ahead of Leclerc, Sainz, Russell, Ocon, Magnussen, Schumacher, Alonso, Hamilton and Gasly.

As they prepare to head off on the formation lap, all are sporting mediums bar Albon, Stroll, Latifi and Vettel who are on softs.

A disaster for Alonso, whose car still has its tyre blankets in place. Indeed, the car is on its jacks. As the field heads off, Alonso is pushed into the pitlane.

The grid forms... although at the back Zhou has a problem. "The engine's switched off guys," he reports.

The start is therefore aborted and the field heads off on another formation lap.

Having managed to get his car going again, Zhou joins the back of the field, though he will need to peel off and start the race from the pitlane. And in the pitlane, Alonso is pushed back into his garage, his race over before it had begun.

They're away! A great start from Verstappen, who moves across to cover Leclerc then back to cover the second Ferrari. In Turn 1, Sainz goes around the outside of his teammate to claim second.

Further back, Gasly spins after touching Hamilton's Mercedes, in an incident at the back after clashing with Hamilton, the Alpine momentarily thrown into the air.

Into Turn 3 Sainz is alongside Verstappen, but the Spaniard has to go around the outside and in the process almost loses out to Leclerc. However, on the long run to Turn 4 Leclerc closes in and has the inside line, thereby reclaiming the position he lost just a couple of corners earlier.

Just behind, Albon runs wide in Turn 3 as he discovers that three - Perez and Bottas being the other two - into one won't go.

At the start of lap 4, Hamilton nails Albon in Turn 1. Norris subsequently makes a move on the Williams driver but goes wide.

Perez closes on Schumacher who is all over Magnussen who is harrying Ocon.

Sainz closes to within 0.5s of his Ferrari teammate, who has lost ground to the leader. Sainz makes a move in Turn 3 but Leclerc slams the door.

Sainz makes another move on Leclerc, this time at Turn 4, but runs out of room and wisely backs off.

Hamilton has passes Bottas for ninth, however, the Finn hangs on to the rear of the Mercedes.

Albon gets a 5s penalty for forcing Norris off track.

Perez gets past Schumacher in Turn with a great move and sets about taking on Magnussen.

Next time around Perez passes the second Haas at the same spot, meaning the Mexican is now up to 6th.

Vettel has gone off and into the gravel at Turn 6, bringing out the yellows. "Albon hit me there," reports the German.

As Perez closes on Ocon, Hamilton reels in Schumacher. The Mexican makes short work of the Alpine to claim 5th.

Meanwhile, leading by 2.7s, Verstappen's every move is cheered by the crowd.

Hamilton sizes up Schumacher, but the German is benefitting from the DRS as he follows his teammate. Hamilton makes a move in Turn 4, but the German youngster has it covered.

Next up for Perez is Russell, but the Briton is 5s up the road so it appears to be an impossible ask.

Feeling he is quicker than his teammate, Ricciardo asks to be allowed to pass and take on Bottas. "We're looking at it," he is told.

Out front, Leclerc appears to be reeling in Verstappen, the gap down to 2.7s, or has Verstappen merely eased off?

Hamilton continues to hound Schumacher, but the German youngster is placing his car perfectly.

As Hamilton continues to battle Schumacher, Bottas has closed to within DRS range.

With their hero seemingly set for victory, the crowd is now cheering Schumacher's every move.

"The car in front of me has been off at least four times," complains Hamilton.

"Tell Kevin to slow down, I need the DRS," urges Schumacher.

Finally, on lap 21, as the exit Turn 3, Hamilton gets ahead. Despite his best efforts, Schumacher is unable to reclaim the position.

Check out our Saturday gallery from Spielberg here.