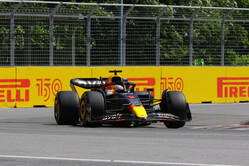 Red Bull's Max Verstappen claimed the win from pole with a two-stop strategy - but he didn't quite complete the grand slam, as the fastest lap honour went to Ferrari driver Carlos Sainz, who chased the Dutchman down to the finish on an identical strategy.

After heavy rain yesterday, the sun was out again in Montreal with similar temperatures to those of Friday, at around 25 degrees ambient and 40 degrees on track.

Mario Isola: "It was nice to see our new 18-inch tyres providing close competition in Canada all the way down the grid, delivering some hard-fought battles. The same strategy but slightly different timings for Max Verstappen and Carlos Sainz set up a thrilling fight to the finish, in which they were able to follow each other right to the flag. The P Zero medium and hard tyres allowed all the drivers to push to the maximum from start to finish, enabling a duel for victory and a brilliant fightback from the bottom of the grid for Charles Leclerc."