Wolff hits out at "pitiful" rivals 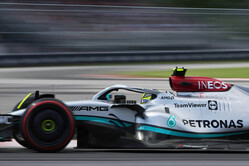 Toto Wolff has branded rival teams as pitiful as "pitiful" and "disingenuous" as row over bouncing escalates.

Drive to Survive looks set to have a whole new chapter (or two) this season, as the porpoising issue which has plagued a number of teams, most notably Mercedes, threatens to split the paddock.

While this problem has been there since pre-season testing, it was in Baku that it took centre stage with even the mainstream media getting in on the act.

Over the course of the weekend, George Russell, who had previously warned about the risk to drivers from the phenomenon, called on the FIA to look into changes to the rules, a rallying cry subsequently picked up on by a number of drivers.

Then came the images of Lewis Hamilton slowly and painfully emerging from his car, and the warning from Toto Wolff - much like the warnings that the Briton might not return to F1 after Abu Dhabi - that the seven-time champ could sit-out this weekend's race.

Three days later, the FIA issued a technical directive aimed at addressing the porpoising issue, effectively warning 'deal with it or else'.

Aside from the timing of the issuing of the technical directive, which several teams have criticised, there is unease that the rules are being changed mid-season - with safety the necessary ingredient to force through the change - in a bid essentially aid one team, Mercedes.

The technical directive stated that a metric to measure the oscillations would be confirmed and any team failing to meet the demand would have to increase the ride height on its cars.

However, as teams continued to argue that those teams suffering the phenomenon were doing so because of their own mistakes and therefore it was wrong to punish everyone, the FIA announced that the rule change wouldn't come into being until Silverstone at the earliest.

In a suspiciously early reaction to the directive, during Friday's practice sessions Mercedes ran a second stay on Russell's car in a bid to stiffen the floor, however a number of teams subsequently questioned the move.

"Technical directives, as we all know, aren't regulations," said Alpine's Otmar Szafnauer. "So it could very well be that we shouldn't be running this in qualifying, in the race.

"And if teams have brought those stays, I would imagine they could be, perhaps, looked at after and then protested," he added. "It's against the regulation as it stands today.

"We definitely don't have one," he confirmed. "And unfortunately, if you do have an extra stay, you can run the car lower, lower and stiffer, and gain some advantage.

"Some cars that are still overweight," he added. "And that's a trade-off decision you make between adding weight to the car so you can stiffen the floor. If you're just given a stay then you don't have to add the weight and do the same job."

Naturally, the issue was top of the agenda at a meeting of the team principals on Saturday, and having previously claimed that the rule change was essentially to benefit one team, Red Bull's Christian Horner repeated his claim, the Briton supported by a number of rivals.

Emerging from what has been described as a "heated" meeting, Toto Wolff was not impressed.

"This is a sport where you're trying to keep a competitive advantage or gain it, but this situation has gone too far," said the Austrian. "All drivers, at least one in every team, have said they were in pain after Baku, that they have difficulty keeping the car on track or blurred vision.

"Yet team principals are trying to manipulate what is being said in order to keep their competitive advantage. Trying to play political games when the FIA tries to come up with a quick solution to at least put the cars in a better position is disingenuous, and that's what I said.

"I'm not only talking about the Mercedes," he insisted, "all of the cars suffered in some way or other in Baku and still do here. The car is too stiff or the car is bouncing, whatever you want to call it. This is a joint problem we are having in F1. It's a design issue that needs to be solved.

"We will have long-term effects that we can't even judge and at any time this is a safety risk," he warned. "Coming up with little manipulations in the background or Chinese whispers or briefing a driver is just pitiful."

That aside, other that the appearance of easing up on the move after loudly announcing it on Thursday, some are unhappy with the actual timing of the directive.

"The timing was not really ideal, because you have all the team travelling, everything is on site," said Aston Martin's, Mike Krack. "Yes, you can react, but you need to be really sure what you're doing or you need to know upfront what this will do. In such a situation you have to take a conservative approach, and then look for it for the following race. But as I said, the timing really could have been better.

"The timing was absolutely not good," agrees Franz Tost, "because most of the people were travelling and just to send out a technical directive a few days before the race is for sure not the best.

"And to the reaction time, you know, especially the floor of a Formula 1 car is a very sensitive part. It's not just to put any parts on it without investigations.

"Me, from AlphaTauri, have to find out what we do, in which direction we will react to the technical directive, regarding the stiffening of the floor or whatever. And this takes some time. And we will for sure not do it here."

"This is not a team's problem," concluded Wolff of the phenomenon. "This is a design issue of ground effect cars that needs to be tackled before we have a situation, whatever it is. And it is not just by putting the cars up, because putting the cars up doesn't solve the stiffness of the inherent aerodynamic characteristics.”

At which point we repeat our previous question, where is Ross Brawn, the mastermind behind the rules overhaul, someone who should have seen this coming?