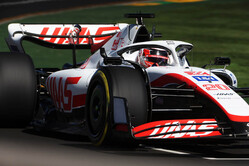 Guenther Steiner has revealed that the upgrade originally planned for the forthcoming French Grand Prix will now be introduced a week later in Hungary.

Insisting that the failure to introduce upgrades previously was not down to money but rather to fully exploit what they already have, the plan was to introduce an upgrade - the only one of the season - at Paul Ricard.

However, speaking to the media as the Canadian Grand Prix weekend got underway, Steiner admitted that due a desire to check on "something in the windtunnel" the upgrade will be held over.

"Maybe it will be Hungary," he said. "We took a step back because we wanted to check something else in the windtunnel, but now we are full steam on in production for Hungary.

"Hopefully it's a big step performance wise," he continued. "How it looks I don't really care, but you will see a difference."

Confirming that the upgrade will be the only one of the season, Steiner said that attention will then focus on 2023.

"We will shift to next year's car," he said. "That's it... no further upgrades. We are stopping to make parts for this car.

"You always continue to develop and obviously, if you find something which on this car gives you a big advantage, then you do it. But we are not specifically working for this car on a big package."