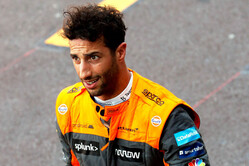 "I won’t go down without a fight," vows Daniel Ricciardo as Zak Brown's 'expectation' comment sees the media vultures circle.

Though he has since sought to play down his comment that Daniel Ricciardo has not lived up to expectations, Zak Brown's words were all that were needed for the usual suspects to share their insight with the world.

Ignoring the usual insane, nonsensical clickbait headlines from the tabloids and others, even former drivers have leapt into the debate.

Fact is, Ricciardo was lured from Renault with the intention of being number one - or at least equal - to Lando Norris, but for the most part the Briton has seen off the Australian.

However, as was the case with Ricciardo's former teammate, Sebastian Vettel, drivers don't suddenly forget how to drive, certainly drivers of the calibre of Ricciardo.

Speaking in Monaco, team boss, Andreas Seidl, the man who truly orchestrated McLaren's rise up the grid, and who works far closer to the drivers than publicity-hungry Brown, gave his support to the Australian.

"I see that differently," he said of Brown's infamous expectations comment. "Barcelona, in the race for Daniel, it was simply not possible to do a better pace," he continued.

"That's something we had to analyse after the race, which we did, and we found an issue on the car, which gave us an explanation, which was important, and we learned from that. We have actions in place in order to make sure that doesn't happen again.

"Daniel says himself that he still doesn't feel let's say 100% with the car, especially when it's about pushing it to the absolute limit in qualifying. He's up against a very strong team(mate) as well, with Lando, and if you put both things together, that's the gap we are sometimes seeing.

"And all we can do, together with Daniel, with a commitment on both sides, is to simply keep working hard in order to find these last percentages. And that's where we all spend our energy on."

Ricciardo's weekend got off to the worst possible start when he crashed on his first flying lap in FP2, having finished seventh in the opening session.

"We, as a team, tried to push probably too much, together with Daniel, and that's why we had the crash," explained Seidl, again taking the driver's side as opposed to further, and publicly, demoralising him.

"In the end, that can happen here in Monaco," said the German. "Obviously you want to avoid it, it is not ideal missing out on a on an entire session, but Daniel is experienced enough, we are experienced enough as a team to leave that behind us today and go again."

However, that was before another tough race that saw Ricciardo finish a distant 13th.

"Obviously, a tough weekend to take," said the Australian, "unfortunately I’m experienced with these, had a few of them the last 12 months, so I feel like I can handle them a little bit better.

"Therefore, I will continue to smile or at least try to smile," he added, according to the official F1 website, "but deep down I'm obviously disappointed.

"There is still some stuff to get on top of, and obviously it’s been a while now, so I wish it still wasn’t the case," he admitted, "but I think the reality is that there will be some tracks where it just clicks from the first practice and where it's good, but I think I’ll expect to probably still work at it and try to keep trying.

"Try to keep trying, that’s it, I won’t go down without a fight but of course I don’t wish to be fighting for 13th. I'll try to get back in the points soon."

Even the greats have their lean periods... perhaps its time for Brown, the 'experts' and 'clickbaiters' to cut the guy some slack.