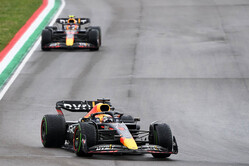 Max Verstappen led a Red Bull one-two from first on the grid, after starting on the Cinturato Green intermediate tyre, moving onto the P Zero Yellow medium, and then finishing the race with a 12-lap stint on the P Zero Red soft. Exactly the same strategy was used by his teammate Sergio Perez.

Ferrari's Charles Leclerc instigated this strategy by stopping before the Red Bulls, but was forced into an extra pit stop after hitting the wall in the closing stages from third. He recovered to finish sixth.

All the other drivers stopped only once (from intermediate to medium) with the exception of McLaren's Daniel Ricciardo and Haas driver Mick Schumacher.

The race started with ambient temperatures of 14 degrees centigrade and track temperatures of 16 degrees. Earlier rain meant that the track was damp when the grand prix got underway, with all the drivers starting on the intermediate before a dry line emerged, allowing the drivers to switch to slick tyres.

Mario Isola: "At the start of the race the intermediates worked well over a reasonably long stint, as was expected. I was a little bit surprised though that everyone chose the medium rather than the soft once the track had dried, in the cool and still damp conditions, but they were obviously thinking about going all the way to the end; and that's exactly what many of the drivers did. Ferrari came up with an interesting strategy, which was then copied by Red Bull, to go for the fastest lap with the soft tyre at the end. The medium showed impressive adaptability over long runs, because the rain on Friday meant that the teams just had an hour on Saturday morning to understand it, with a maximum run of only around 20 laps possible. Despite that limited information, we saw long runs of 40 laps with no issues. Well done to Red Bull, but also to the fantastic home crowd here at Imola, which always shows such passionate support."