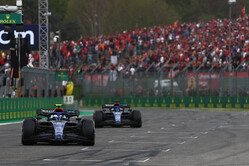 Alex Albon finished 18th and Nicholas Latifi 19th in the first F1 Sprint of the season, which sets the grid for tomorrow's Grand Prix. Alex ran the 21-lap race on the soft Pirelli tyres, with Nicholas on the medium compound. Both drivers initially gained some positions, however dropped back as the race progressed.

Dave Robson, Head of Vehicle Performance: It was good to see the car in the dry conditions and we were reasonably pleased with what we found in FP2. In the Sprint we expected degradation on the Soft tyre but felt that overall, it offered the best opportunity for Alex to progress. With most other drivers opting for the same choice, there was less opportunity than we had hoped for, but he was still able to improve his starting position for tomorrow. Nicholas chose the Medium compound hoping to gain on people towards the end of the race, but he too suffered with some degradation, which denied him this opportunity.

The forecast for tomorrow looks mixed and with the Grand Prix offering more strategic options than the Sprint, there is still a lot to unfold in Imola.

Alex Albon: It was a tough day. We didn't quite have the pace of the other cars around us so I was having to push harder, which then destroys the tyres. It's a bit of a vicious cycle. We seem to be struggling slightly more on the softer tyres, so we need to keep working on that. We've made up a couple of places for the race, so tonight we'll focus on what we can do in the race and keep pushing.

Nicholas Latifi: It was a tricky afternoon for us. It was good to get the first F1 Sprint event of the year under our belts but we seemed to struggle. We tried something different to most of the field but we have to see what we can do to improve our race management and our overall pace for tomorrow. It's a longer race so there could be opportunities and hopefully we can have a better end to our weekend.