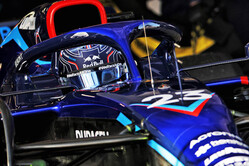 The third round of the 2022 FIA Formula One season brings the long-awaited return to racing in Melbourne's Albert Park as the team heads down-under for the Australian Grand Prix. The temporary 5.303km track running around the Albert Park lake presents an interesting challenge for drivers and cars, offering the formidable combination of low surface grip and unyielding walls.

Dave Robson, Head of Vehicle Performance: Racing again in Melbourne is a fantastic indication of a progressive return to pre-pandemic normality. Not being at Albert Park for two years has been a real shame and we are so pleased to be back and sampling the new circuit layout. Traditionally, the street circuit nature of Melbourne has made for a fantastic technical and physical challenge for the drivers, but also led to difficulty in overtaking. The revisions to the layout and DRS zones should improve this, potentially making it one of the very best circuits on the Formula One calendar.

With the removal of the old Turn 9/Turn 10, there is one fewer chicane in the layout, but nonetheless, changes of direction at low and high speed still dominate the circuit. Braking stability, kerb riding and car agility therefore remain critical to the car setup. The much faster section between Turn 8 and Turn 11 will alter the trade of downforce and drag, but with driver confidence also at a premium, taking off too much downforce could be detrimental, and we can expect to see all teams experimenting on Friday.

Adding to the complexity of the weekend is a courageous compound choice from Pirelli, with the C2 and C3 compounds being the Prime and Option as they were in Jeddah, but C5 being the Qualifying compound here in Melbourne. This may place significantly different demands on the car setup for qualifying and the race, but with no opportunity to change the setup on Saturday night, this compromise could be crucial.

Following our difficult weekend in Jeddah, we are looking forward to a clean event here as we look to extract a little more potential from the FW44. The challenges here are different to Bahrain and Saudi Arabia and so we will be open-minded and pragmatic with our approach.

Nicholas Latifi: I'm really excited to get my first taste of racing at Albert Park. I've not yet driven there with Formula One, although I did get to explore the venue in 2020 and I thought Melbourne was an incredible place. The circuit itself looks really fun, so to experience the whole event will be great. The new track changes look promising; I really hope it'll improve the racing so we're able to put on an exciting Grand Prix for the fans after they've waited for so long.

Alex Albon: Melbourne is a very cool city so I'm really excited to go back after a long time away. The fans know how to have a good time in Australia which means the atmosphere at Albert Park is always great; I'm sure it'll be even better after a couple of years without us racing there. There are a lot of changes to the circuit this year, so I'm excited to see how we get on and how the FW44 handles the track. I know the whole team will be hoping to bounce back after a tricky event in Jeddah, so we'll be pushing hard to maximise performance and do the best we can.