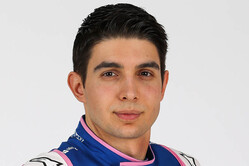 After scoring double points in the season-opening Bahrain Grand Prix, the team heads 1,200km west to Jeddah, Saudi Arabia, for round two. Chief Technical Officer Pat Fry reviews the first race from the team's perspective and offers his thoughts on the fast and flowing Jeddah Corniche Circuit.

What are the main takeaways from the season-opening race where both Esteban and Fernando scored points?
Pat Fry: "It's always good to come away from the first race with both cars scoring points and, just as importantly, learn more about how the car works in full racing conditions. We ran reliably on both the chassis and power unit when it counted with the odd hiccup here and there, which is expected at the first race of the season. We have a solid base to build from now and we'll continue our learning this weekend."

What are the early assessments for cars following closely as per the new regulations?
PF: "The main talking points in general for this race were the questions surrounding overtaking and racing in general with the new 2022 regulations. I think it's too early to say just how much easier overtaking is likely to be, it certainly looks like the cars can follow one another much more closely without hurting the tyres especially in the corners, which is a good step in the right direction. Some of the action we saw in the race like the overtakes into Turn 1 and up to Turn 4 are simply a characteristic of the Bahrain circuit. So, we will have to see what it's like in Saudi Arabia this weekend and beyond before making any conclusions."

Why did we see so many pit-stops in the race and do we expect that trend to continue?
PF: "Firstly, huge credit to the pit crew for running six faultless pit-stops in the race. It's been a while since we've experienced so many stops in one go and it provided an added element for the strategists to figure out the best way possible to be competitive in the race. Tyre degradation was high for all teams in Bahrain and we entered the race knowing it was close between being a two or a three-stop race. For Jeddah this weekend, we will assess the severity of tyre degradation during practice. Last year in Jeddah, it was a safe one-stop before the red flags, so our expectation is it'll be much more conventional in Saudi Arabia given the nature of the track but that will be part of the learning on Friday."

How challenging is the Jeddah street circuit and do we have upgrades to the A522 coming this weekend?
PF: "It's a completely different track to Bahrain as it's lower downforce and much higher average speed with the added threat of the walls. It's one the drivers do enjoy as it's fast and very exciting. We don't have any distinct upgrades for Saudi Arabia but we will run some interesting test items in practice, which will give us some ideas for future concepts. As it's a low downforce circuit, we will have a different rear wing for this weekend and Esteban will return to the latest spec sidepod after the issue from last week. We have a development plan in place and we are pushing ahead as hard as we can for the Melbourne race and beyond."

Esteban Ocon left Bahrain with his highest points total in a season opener of his Formula 1 career. He now shifts focus to Saudi Arabia, a place that last year saw the Frenchman narrowly miss out on his third-ever Formula 1 podium.

How would you summarise your Bahrain Grand Prix?
Esteban Ocon: "In terms of points in an opening race, Bahrain was my best performance since I started in F1 so that is definitely a positive. Double points for the team made Sunday even better and when you compare our opening race last year, there is much to be happy about. Other than my incident with Mick early on in the race, I was happy with how Sunday went overall. But of course, this is only race one and my focus now is to work team to find those areas of improvement and further understand our new car to stay as competitive as possible."

We're going back to Jeddah this week. How do you feel about the track after having experienced it for the first time last year?
EO: "It's great that we are racing so soon after Bahrain and it will be key to carry this positive momentum into the Saudi Arabian Grand Prix weekend. It was great to finally drive the A522 in racing conditions and very much looking forward to doing it all again in just a few days in Jeddah. We raced there not too long ago so the track isn't as unknown to us drivers as it was last year. It's a fun and fast track, similar to Baku for example, where drivers and cars are pushed to the limit, and one small mistake can really cost you. Personally, I really enjoy driving there and just missed out on the podium last year. It will be great to be back and we'll push for another solid weekend."

How will you prepare for the race? Anything you will do differently this year now that you know the track well?
EO: "Preparation is always key but especially for a race like this. I need to make sure I am well rested and focused going into Friday as it is a demanding circuit with high speeds, a lot of chicanes and fast corners with walls always in very close proximity. All these corners present a challenge for the engineers to work out the best set up for this new car. But we'll work together to maximise our package and already looking forward to being back on track with the team."

Fernando Alonso scored his first world championship points of 2022 last weekend, after a hard-fought season opening Bahrain Grand Prix. The Spaniard sets his gaze on further improvements and a strong race for round two at the high-velocity Jeddah Corniche Circuit.

You scored your first points of the championship last weekend, are you happy with your start to the campaign?
Fernando Alonso: "Both cars scored points which is the main thing for us from the first race. Last year we didn't score any in Bahrain, so it's already an improvement. I think we showed good pace for most of the weekend, but we struggled with tyre degradation during the race, and this impacted our race quite a lot. Nonetheless, we need to evaluate all of this data and try and improve on this going forward, as it'll no doubt be a challenge at other races this year."

What sort of developments are the team working on right now?
FA: "The competition in Formula 1 is not only on track but off it too. At Enstone and Viry we have to focus on what's ahead and continue to bring updates to our cars, so we can not only stay where we are, but make steps towards the front. The team is working so hard at both factories and at the track too. It's a pleasure to see this all coming together and I'm really happy with what we've achieved so far. There were some long hours for all of the team over the last few weeks and they deserve credit for this. But this is only just the beginning!"

Tyre wear was a big topic for everyone in Bahrain. Do you think we'll see the same in Jeddah?
FA: "Bahrain is always tough on tyres but with the new cars it seems even more so this year. The high tyre wear has provided some more exciting racing for the fans because each car is at a different level of degradation during a Grand Prix, so it means there can be quite big performance differences on track. This combined with it being easier to follow the cars ahead and we have some quite interesting battles on track. We are expecting tyre wear to be an issue throughout the season, but it's too early to tell if we will experience these problems in Jeddah. Whoever can get on top of this issue faster will be in a good position."