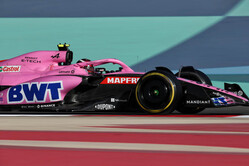 All eyes were on an intriguing qualifying session under the Sakhir lights as all teams showed their true pace in full, low-fuel trim after two weeks of pre-season testing.

After a smooth Free Practice 3 earlier in the day, both drivers began qualifying on the front foot with Esteban safely through Q1 after two runs on new Soft tyres and Fernando joining him in the second round as his first effort on Softs was good enough to progress.

In Q2, Esteban had the edge on Fernando on the first run with the pair separated by just 0.021secs in eighth and ninth, respectively. After a slightly scrappy lap and a small error at Turn 2, Esteban was unable to improve from his first run and slipped back to tenth. On his second lap, Fernando put in a lap time of 1min 31.621secs to go ahead of Esteban, who, in the end, was pipped by Pierre Gasly to the final spot in Q3 by just 0.065secs.

Opting for just one push lap on new Soft tyres in Q3, Fernando set a 1min 32.195secs, to qualify in eighth place on the grid for tomorrow's 57-lap season-opening Grand Prix, which gets underway at 18:00 local time.

Esteban Ocon: "Firstly, it's a great feeling to be back in qualifying mode and giving it my all under the thrill of proper racing conditions. Heading into the session today we knew it was going to be a tight one, especially to get into Q3. We were lacking a bit of pace on my side of the garage during the weekend, but we stepped it up today for qualifying and losing out on Q3 by such a small margin is of course frustrating but there are definitely positives to take. We still have a new set of tyres for tomorrow and we're starting from the clean side of the grid, so that should lead to an exciting race and I already can't wait to get back out there."

Fernando Alonso: "I'm happy with today's qualifying, because after the winter you never know exactly where the team's performance is going to be. Every new season you can have positive or negative surprises, so to see both cars fighting for the top ten, is a good start. The job done over the winter at Enstone and Viry-Chatillon has clearly been positive, and the car feels good. The development has been good and now we need to be fast off-track as well. It'll be interesting to see how the new cars can fight tomorrow and it's great to see a mixed-up grid. It seems easier to follow the cars ahead, whether it provides more action on track we shall soon see, and the first couple of laps will be interesting. Tyre degradation and the resulting race strategy are going to be critical considerations for tomorrow."

Otmar Szafnauer, Team Principal: "It was a great qualifying performance from the team today. Esteban was slightly unlucky to just miss out on Q3. Unfortunately, he had to run the old spec sidepod, which is a loss in performance for him. That said, starting in eleventh puts him in the mix and points are only given out on a Sunday, so he has every means to be looking forward to the race. Fernando did a wonderful job, and he was close to being one or two places higher, such are the fine margins in a competitive field. This qualifying performance gives the team an excellent starting platform to push on and we must aim for a strong rate of development to push even closer towards the front. As we've seen between both of our cars today, every ounce of detail is going to make a huge difference but that's an exciting challenge for us. Looking ahead to tomorrow, we can certainly have a strong race from eighth and eleventh on the grid and we have the potential to score points with both cars."