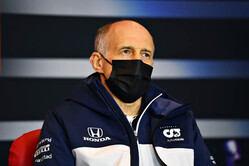 Ahead of the busiest season in F1 history, AlphaTauri boss, Franz Tost warns that 23 races is the absolute limit.

While today's meeting of the F1 Commission will witness the findings of the investigation into the Abu Dhabi debacle, some fans have already reached a verdict having vowed to turn their back on the sport.

However, another threat to F1 comes in the form of its ever-expanding calendar, with some fearing too many races will dilute interest, never mind the old adage about quality and quantity.

AlphaTauri boss, Franz Tost is concerned that 23 races is too many. Indeed, the Austrian believes the calendar would work best at 20 races.

Last year, we were lucky because the races were very interesting, there were always fights, but we can't expect that this will always be the case," he says. "So, for me 23 races is the absolute limit, not from the workload point of view, but because I am concerned that with such a high number of races, in the end it could cause people to lose interest in Formula 1.

"For me, the best number would be between 18 and 20 races," he adds, "because Formula 1 should be a premium product and we really should think about maybe reducing the number of races to keep it special. Personally, I am fine with 23 races or more, but this is not the question. The question is what's best for the future of Formula 1."