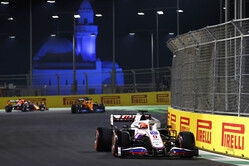 Schumacher and Mazepin exited the evening's qualifying session at the end of Q1. Both had three sets of Pirelli P Zero Red soft tires to attack the challenging and fast 6.175-kilometer (3.836-mile), 27-turn layout. Schumacher improved each time out on fresh rubber - logging a 1:30.521, 1:29.772 then his best of 1:29.464 on his last flying run - placing the German P19. Mazepin clocked a 1:31.442 to start, followed by a 1:30.473 on his second set. The Russian was forced to abort what would have been his third run - Mazepin a victim of the traffic logjam before the start of his final lap - remaining P20 on the timesheet.

Nikita Mazepin: "The track's still good - it cleared up from yesterday which is a positive. I was happy with my rhythm, that was totally deliberate and ended up in a very good place in FP3 and if anything, I should've been better in qualifying. Unfortunately, qualifying is about a lot of others letting you do your lap. 6.1km on this track isn't enough for even the best in our sport to get through. I was divebombed by four or five cars into the last corner when I was trying to make a gap and ended up racing Vettel on the start-finish line so didn't get my lap in."

Mick Schumacher: "I delayed the deployment of my DRS, and it's around a tenth so it's quite frustrating but I was not anticipating being so close to the Aston Martin so that's something I think really shows our build-up of performance over the weekend. The race is a different story - if we get the opportunity to fight we will but if we get ahead and have a good start, we might be even able to keep it."

Guenther Steiner: "It was a pretty good day with a lot of running and no damage. It was solid running for all of FP3 and solid running from both in qualifying to get close to the cars in front of us, which is very encouraging for us so late in the season. Unfortunately for Nikita, his last lap attempt wasn't successful because there was a tangle in front of him and he had to lift and couldn't get going, but otherwise a flawless effort from the whole team and the communication between driver and engineer was good."