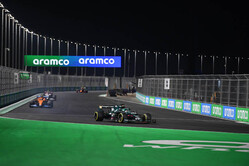 Amidst fears over traffic and the huge speed differentials at Jeddah, drivers have been warned not to attempt to create gaps at one of the most dangerous parts of the track.

Though the drivers were largely in favour of the new Jeddah Corniche Circuit, a number of near misses in the opening sessions and support events, led to concern over traffic as a result of drivers slowing in order to create a gap to the car ahead.

With some drivers on flying laps whilst others were either building up speed or cooling down, fears over the enormous differential in speeds was causing serious concern.

"It's definitely a lot worse than a lot of places we go to," said Lewis Hamilton, who set the pace in both the opening sessions. "It's Monaco-esque, the speed, the closing distance on other cars, is definitely getting to a bit of a danger zone."

While the only red-flag over the course of Friday's sessions was the result of a mistake by Charles Leclerc, race director, Michael Masi has warned the drivers ahead of today's action.

"Any driver intending to create a gap in front of him in order to get a clear lap should not attempt to do this around Turn 23 through to Turn 25," he says in the latest version of his event notes. "Any driver seen to have done this will be reported to the stewards as being in breach of Article 27.4 of the Sporting Regulations."