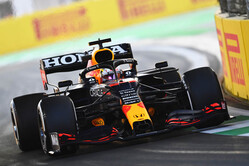 Like the recent race in Qatar, this session, and indeed tomorrow morning's, is pretty much unrepresentative as qualifying and the race take place in the evening when temperatures are lower.

Fears in terms of the potential for incidents and stoppages were realised earlier during F2 practice when a number of incidents resulted in red flags.

Other than the obvious 'greenness' of the track, there is the fact that it is narrow and lines with walls, any mistakes will be severely punished.

Of course, while the title protagonists will be doing all they can to avoid making their own mistakes there is nothing to prevent them getting caught up in the calamity of others.

Sainz has the honour of being the first F1 driver to take to the track, followed by teammate Leclerc. The Ferrari pair, both on softs, are followed by Ricciardo (mediums) and Mazepin (hards).

Verstappen is among the early risers, the Red Bull driver on hards.

Ricciardo is warned of a slippery surface - possibly oil from a support race - in Turns 1 and 2.

We are already lapping at an average of 147 mph.

As Bottas heads out, on softs, Alonso and Hamilton are the only 'no shows'.

"It smells like something is very hot in the car," reports Gasly.

As Hamilton finally heads out, Verstappen improves to 31.736.

Bottas, on softs compared to Verstappen's hards, goes second with a 33.014.

On board footage shows how close some drivers, especially Verstappen, are getting to those walls.

Quickest in S2 and S3, Norris goes second, just 0.497s off the pace, and, like Verstappen, on the white-banded rubber.

Also on hards, Norris goes quickest in S2, subsequently crossing the line at 31.957 to go seventh.

On fresh hards, Verstappen raises the bar ever higher with a 30.354, the Red Bull driver quickest in all three sectors.

Bottas goes second with a 30.949, ahead of Norris, Leclerc, Gasly and Hamilton.

Ocon expresses concern about something on his rear-right tyre, though he doesn't think it is blistering.

Pushing harder and harder as he continues to learn the track, Verstappen improves to 30.014. Hamilton goes second, albeit 0.664s down on his rival.

Testing the waters, looking fairly casual in the first and final sectors, Hamilton goes quickest of all in S2.

Meanwhile, Perez is down in 17th on the hards, 2.7s off the pace. Early days we know, but the Mexican really needs to be up there with his teammate this weekend.

Back in his garage, mechanics swarm over Verstappen's car, the Dutchman having run over one of the numerous kerbs here.

Gasly improves to fourth with a 31.003, the Frenchman, like everyone else on track, on softs, for Verstappen is now heading out on the red-banded rubber.

The Dutchman is off the pace by the first split, and even further behind in S2, ultimately aborting the lap.

Replay shows him making a mistake and running over the kerb he ran over earlier.

As The Dutchman finds himself alongside Hamilton, Bottas posts a 30.009 to go top.

Elsewhere, Sainz goes third, ahead of Gasly and Leclerc.

A 31.585 sees Perez improve to 13th, as Raikkonen gets up close and personal with the barriers.

Unable to improve on his time with the softs, Verstappen heads back to the pits. After several minutes, and no doubt a set-up change, he heads out again.

Verstappen has the track almost to himself, but again he aborts following a mistake in the opening sector. He subsequently pits.

Elsewhere, Perez is warned that his rear axle is on the "hot side".

A 30.318 sees Giovinazzi go fifth as the track is clearly beginning to evolve.

After Ocon makes a mistake and runs wide in Turn 1, Verstappen, who is running wide, also goes off almost in sympathy.

Turn 23 is causing issues for a number of drivers, not least Verstappen, as Norris also gets it wrong.

Vettel almost trips up over Mazepin who, as ever, is cruising on the racing line.

A late improvement sees Verstappen close to within 0.056s of his title rival with a 29.842, the Dutchman quickest in S1.

The session ends, amazingly without so much as a spin.