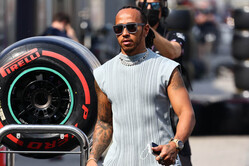 While he heads into the weekend that could decide the 2021 title, Lewis Hamilton insists that he is relaxed, though also admitting that he is not entirely comfortable with the location.

As ever, the official F1 website avoids all hint of controversy as it carefully selects the world champion's comments to the media ahead of the inaugural Saudi Arabian Grand Prix.

While it faithfully reports the fact that he is "relaxed" heading into the weekend, there is no mention made of his discomfort over the country's human rights record.

Looking ahead to this weekend's race, which could see the drivers' title decided, the Briton told reporters: "I'm excited to be getting in the car, I'm very grateful we have these two races to fight it out. The team's working as hard as it can, I feel great.

"There's a couple of bits that are different," he continued, referring to the ongoing battle with Max Verstappen, "in one sense because we've got two incredibly close teams. It's different because we're fighting for unchartered territory, no one has ever won eight drivers' titles or teams', so that's new.

"Then, on the other side, I'm more relaxed than I've ever been," he added. "It's not the first time; I remember how it was with my first championship and even my second and third, the sleepless nights, and all those sorts of things, whereas I'm a lot more sure about myself and I've applied myself like never before.

"I know I can't change anything from the past but all I can do is prepare as best as I can for what's ahead of me, and I 100% know I have."

"Maybe I tapped into something different in Brazil, that is just, maybe I haven't been there before, I don't know.

"I definitely have in my career before, been in those positions many, many times before. But I'd like to think I've been doing well all year. You are constantly learning, your surroundings, the car, how to work with the team, how to get more out of each member of the team.

Asked if this title would mean the most, he replied: "It would be, yeah, for sure. One being that again it's something that no one's ever done before. It's been the toughest battle that the sport has seen for a long, long time, and the most challenging, so I think collectively it would be. Plus we're in a pandemic, so all sorts of things we've been faced with."

However, with many still concerned that the sport has accepted Saudi Arabia in to the F1 family, Hamilton admits that he has doubts about whether the race should have happened.

"Do I feel comfortable here? I wouldn't say I do," he admitted. "But it's not my choice to be here. The sport has taken a choice to be here. And whether it's right or wrong, while we are here, it's important we do try to raise awareness."

In Qatar, a country also known for its appalling record on human rights, he wore a helmet with a livery in support of LGBTQ+ rights, and will continue wearing it this weekend.

"Whilst we are here it's important we do try to raise awareness," he said. "In the last race you saw the helmet that I wore. I will wear it again here and in the next race because it is an issue.

"If anyone wants to take time to read what the law is for the LGBT+ community, it is pretty terrifying," he added. "The sport and we are duty bound to make sure we try to raise awareness for certain issues we have seen, particularly human rights in these countries that we are going to.

"There are changes that need to be made," he continued. "For example, women's rights of being allowed to drive since 2018. It is how they are policed. Are they really in effect? Why are the women still in prison from driving many years ago? There is a lot of change that needs to happen and I think our sport needs to do more."

Meanwhile, in an added twist, Mercedes and Hamilton, have come under fire following the announcement of a sponsorship deal with Kingspan.

While the press release proudly boasts of Kingspan, the global leader in advanced insulation and building envelope solutions, chairing a new Sustainability Working Group for the team, survivors of the Grenfell Tower fire in 2017 are calling on the German team to terminate the deal as Kingspan made some of the insulation used in the refurbishment of the building which caught fire with the loss of 72 lives.

Nabil Choucair, who lost six members of his family in the fire, tells The Guardian: "I am very disappointed that someone who says he supports us, wants to advertise Kingspan who contributed to the loss of innocent lives. He should not accept it. You can't support the community and say you respect the deceased and families and still take sponsorship like this."

Last year, on the third anniversary of the fire, Hamilton took to social media to give his support to those affected by the disaster.

"Today marks three years since the horrific Grenfell Tower fire in London," he wrote on Instagram. "Remembering the 72 souls we lost and their loved ones, and everyone affected by this tragedy. #justiceforgrenfell."