Hamilton hopes to have positive influence on Russell 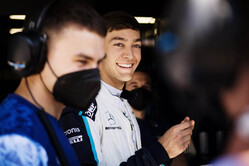 Lewis Hamilton says he aims to have a positive influence on new teammate George Russell, and hopes to see him become Britain's next world champion.

Next season sees Lewis Hamilton partnered with his third 'new' teammate since joining Mercedes in 2013.

Following the 'difficult' partnership with Nico Rosberg, Valtteri Bottas has been a far more obliging teammate, which probably explains why Hamilton was so keen to keep him.

The arrival of Russell however is sure to change the status quo at Brackley, for while the youngster will be keen to assert himself from the outset, he is entering the lair of Lewis, the man who has won successive constructors' titles for the German team and (thus far) six drivers' titles.

"You've seen George is hugely respectful," says Hamilton. "He's a super-talented young man and I think there's a huge amount of respect already going in and we've got a nice balance at the moment.

"I remember in 2007 when I went up against Alonso. Of course I wanted to beat him at the first race, so I appreciate and expect George to have that mentality, otherwise he's not a winner, you know?

"But I'm in a different place," he insists. "I really want to see him succeed.

"There's going to be a point where I don't continue in this sport," he adds, "and, you know, he's my team-mate and he's going to be the next Brit that I want to see win a world championship.

"So while we are going to be competing and I want to win on track, I really hope I can have a positive influence on how he conducts himself within the team, whether it's the time he commits to engineering or how he churns through the data or even just how he drives on track."