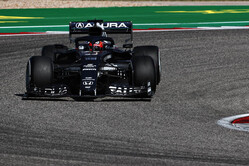 Yuki Tsunoda: "It's been a good day, I've managed to score some important points for the team in the Championship, so I'm really happy with that. It was really tough out there as it was so hot! It wasn't easy starting on the soft tyre, as I had a different strategy to everyone around me, but it meant that I had the advantage on the opening lap, and I tried to make the most of it. The pace today was quite good, so I'm pleased to be coming away with points."

Pierre Gasly: "Unfortunately, we had a suspension problem today, that forced us to retire the car. At the moment we don't know the real cause, so we'll have to go away and investigate this. It's very frustrating because we know every point counts at this stage in our midfield battle. It would've been really good to go until the end of this race, as the atmosphere has been incredible this weekend, right from the very beginning, so it's a shame to not be seeing the chequered flag."

Jody Egginton (Technical Director): "Today we've had a fantastic, well-deserved points finish for Yuki. He managed his race well, making good use of the soft tyre in the first stint and then managing both sets of the Hards to maintain his track position and score points. Frustratingly, Pierre had what looks like a suspension issue, which meant that we had to retire his car. This is something we need to ensure we have understood and resolved ahead of the next race. It cost us some crucial points, which is unfortunate for Pierre and the team. Overall, the package has shown a good level of performance here in Austin, so the objective is to continue this form and keep the pressure on for fifth in the Constructors Championship."