Making an idiotic mountain out of a molehill? 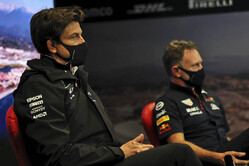 Much is being made of Max Verstappen calling Lewis Hamilton a "stupid idiot" during FP2, which is exactly how F1 bosses want it.

As Max Verstappen prepared for his flying lap as the qualifying sims got underway in FP2, as he entered the final corner to head on to the pit straight, and thereby begin his flyer, title rival Lewis Hamilton nipped through on the inside causing the Red Bull driver to back-off and thereby abort the lap before it had even begun.

In age-old style, the Dutchman presented as extended middle finger, before uttering over the radio: "Huh, stupid idiot!"

"Ignore it, don't worry about it," came the calm response over the radio.

Subsequently frustrated by traffic once again, and thereby unable to post a representative time on the softs, Verstappen moaned: "Why do we always f****** go in traffic?"

The "idiot" comment, coupled with the fact that Verstappen finished eighth on the timesheets (having failed to post a representative time), not to mention the Mercedes newfound speed advantage, was manna from heaven for the media.

"Stupid idiot!" proclaimed the headlines, even from broadcasters and media outlets that usually give F1 the scantest of coverage.

Earlier in the week, Verstappen had revealed that he is not taking part in the latest series of Netflix' Drive to Survive, the Dutchman claiming that it has built its reputation on building-up, indeed manufacturing, rivalries between the drivers. A claim denied by many within the paddock, at least publicly.

However, barely had coverage of the United States Grand Prix weekend begun, certainly as far as Sky Sports was concerned, than we were being told of F1's increasing popularity in the sport, largely driven by the Netflix series.

On duty for Sky this weekend, while steadfastly refusing to name either Netflix or Drive to Survive, Danika Patrick said the show was responsible for the sport's growing popularity in the US, while Jenson Button went into overdrive.

Repeatedly insisting that F1 has finally "cracked it" in America, he cited the intense rivalries between that exist in the sport.

Not just between the title protagonists mind, but everyone.

According to Button, the action away from the track is just as "exciting" as that to be found on the black stuff, as he assured his audience that team bosses are constantly at war with one another.

Though the relationship between Toto and Christian can be described as somewhat fractious, one would be hard put to find any other team bosses at loggerheads with one another.

And while Button pushes the rivalries, bad feeling and outright hostility between drivers, team bosses, tech gurus, mechanics and the rest, it is easy to forget he raced in an era when the likes of Bernie, Max Mosley and Ron Dennis strode the paddock.

Compared to the days of the Piranha Club what we're seeing now is more akin to Peppa Pig, as the team bosses appear to agree on most things and never miss an opportunity to praise Stefano, Ross, Jean and one another.

After all those years of referring to F1 as "a show" it appears that the powers that be have finally got their way, with heroes, villains, goodies and baddies, just like The Crown or a dozen other series you could name.

Of course, with an eye on the viewing figures and the subsequent rise in revenue, most of the cast members are happy to play along, aided and abetted by their media chums.

For those that grew up in the days of Lauda, Hulme, Piquet or Mansell, calling a rival a "stupid idiot", and the comment making headlines, will raise a smile, but these are different times, and there's a whole new audience to be won over, an audience raised on soaps and reality TV.

So rest assured, that despite the endless virtue signalling and the seeming bonhomie between the inhabitants of Planet Paddock, beneath that thin veneer there is a seething cauldron on frustration, anger, bitterness and intense competitive rivalry.

And anyone who thinks otherwise is a... "stupid idiot".