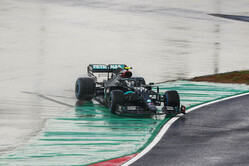 Last year's Turkish Grand Prix at the Istanbul Park circuit, was hampered by a virtual perfect storm of issues which while causing problems for the drivers added some much needed spice for fans.

Ahead of the event, which was brought back on to the schedule after an absence of several years due to the pandemic, organisers had completely resurfaced the track.

However, Pirelli, which had chosen the hardest compounds in its range for the event was not informed of the resurfacing beforehand and therefore had no opportunity to review its decision.

To further complicate matters, the Weather Gods decided to have some fun, meaning that even six-time world champion, Lewis Hamilton declared conditions to be "terrifying" as he and his colleagues struggled for grip.

In an effort to resolve the situation for this year's race, the entire track surface has been water-blasted in a bid to improve grip levels.

"We do regularly each season send updates to the teams about any circuit changes for upcoming events," said race director, Michael Masi, according to Motorsport.com. "Be they barriers, fences, gates, whatever. It may be areas of resurfacing.

"So yes, the surface in Turkey has been effectively water-blasted, would probably be the best way to put it, which is a regular treatment that happens.

"We have seen that regularly used in Singapore as an example, where the public roads that are used they resurface those quite regularly because of the movement.

"That is what has happened there, along with a few other changes."

Always on the lookout for a means of spicing things up, Ross Brawn saw no issue with the drivers struggles last year.

"Drivers sometimes need to remember it's a competition of who crosses the line first," said the F1 MD in his race debrief, "so while grip levels weren't high, it was the same for everyone.

"Some drivers got their head down and came to terms with it, others found it a distraction.

"Having a challenging surface as we had this weekend was no bad thing. It showed a driver's talent to the max. I don't think grip levels are a measure of the level of competition you will have."