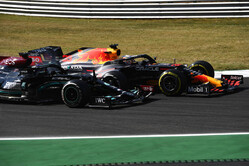 Sergio Perez: "It was a very eventful race and a real shame to miss out on the podium. With the penalty, I think we hoped for a wider view in the sense that it was my corner and I was ahead of Charles, but it is what it is and we tried to recover. From our side we did the best possible race we could as a Team but overtaking was impossible today and it was really difficult to keep ahead of the cars behind. McLaren were really quick and difficult to beat, they've been solid this weekend and especially on the straights they were hard to follow. They had very strong traction so at no point could I be a threat to them, but as a Team this wasn't our track, we weren't so strong here so now we move on and look forward to Russia. There is still a long way to go in this championship."

Max Verstappen: "We were racing for position today but you need two people to work together to make the corner and Lewis just kept squeezing until there wasn't room anymore for two cars and that's when we crashed. When he exited the pits, he started to squeeze me going into Turn 1 so I had to use the green part of the track. It was very tight but there was room for me to go around the outside and then I was pushed onto the orange sausage kerb. I was there to try and race hard but fair. I don't fully agree with the penalty as I believe it was a racing incident. It's very unfortunate what happened today but we are both professionals and so we will move on."

Christian Horner: "We are disappointed with the three place grid penalty, but accept the stewards decision. We felt what happened between Max and Lewis was a genuine racing incident. You can argue for both sides but ultimately it's frustrating and disappointing to see both cars out of the race in what is proving to be an exciting championship. The main thing today is that the halo ultimately did its job and certainly this isn't the way we intended to finish the race. With Checo, he was desperately unlucky and we felt it was very marginal given there was no instruction from the race office to give the position back. We had to make a decision whether or not to get on with the race, and so we got our heads down and then Checo was handed the penalty. He drove some strong laps under intense pressure but was unable to open up a gap and so we were sad to finish third on the road but fifth overall with only one car scoring points."