Gasly wonders why there is no Red Bull return 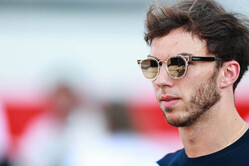 Retained by AlphaTauri for 2022, Pierre Gasly remains as perplexed as the rest of us as to why he has not been called back to Red Bull.

While Nico Rosberg's grid walk for Sky Sports on Sunday was somewhat cringe-worthy, nobody seemingly wanting to interact with 'Nico No Mates' other than to give him a half-hearted thumbs-up, his post-race questioning of a number of drivers more than made up for it.

In particular he put Pierre Gasly on the spot.

Having qualified a brilliant fourth, the Frenchman drove a faultless race bringing the car home in the same position.

Meanwhile, though ranked 'driver of the day' by some, Sergio Perez had finished 8th after qualifying 16th.

Having had an engine change ahead of the race the Mexican started from the pitlane, and as a result - not for the first time - left his teammate fully exposed to the strategic whims of the mighty Mercedes.

Straight to the point, Rosberg asked Gasly why he had been shunned by Red Bull again.

"I wonder why," said the Frenchman, who was dropped by the Austrian team mid-season in 2019, his first year with the Austrian outfit.

"Yeah, there were discussions," he admitted, "I think they are really happy with my performance but, they made their decision.

"Obviously, it was a small disappointment for me as that's where I want to be, I want to have a fast car," he continued. "AlphaTauri, you know, give me a really strong car but it was up to Red Bull and unfortunately it didn't happen.

"It doesn't mean it won't happen in the future," he added, somewhat optimistically, "but for sure for next year I'm not going to drive there."

Having contributed 66 of AlphaTauri's 84 points, as he heads back to Monza, the scene of last year's famous victory, Gasly is proving to be one of the stars of the season, and reinforces the widely held view that he deserves a better seat.

Indeed, one cannot help but feel that the French youngster has committed a sin of monumental proportions to have so clearly fallen out of favour with Mr Marko or Mr Horner.