Tricky" to sign Albon while he has Red Bull ties, admits Wolff 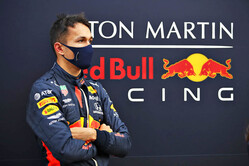 Mercedes boss, Toto Wolff admits that it would be "tricky" for Williams to sign Alex Albon whilst he retains ties to Red Bull.

The Anglo-Thai driver is currently racing in DTM, but - under pressure from the energy drink company's Thai owners - Christian Horner is seeking to get him a seat on the 2022 grid.

The preferred option is Williams, however, understandably, as Red Bull prepares to enter F1 as an engine supplier, Mercedes, which supplies the Grove outfit, is concerned at Albon's ties to a rival.

"It's one thing about the power unit and I think Albon, as I said yesterday, is a driver that deserves a seat in Formula 1," said Wolff.

"But it's tricky to have a 100% Red Bull driver on a Mercedes power unit," he added. "So, happy to work with him, as long as they let him free from his Red Bull contract.

"Alex is in regular contact with Gwen Lagrue, who is running our Mercedes junior programme," he revealed, "and they were discussing with James Vowles, our head of strategy, the opportunities for next year.

"Things get always tweaked, in a way," he added. "He wasn't told to do or not do anything, it was just exploring the opportunities for Alex and for Nyck in an amicable way between Alex and the group.

"On the other side, we're supporting Nyck (de Vries) obviously, and he's in talks with Williams, to get the seat there. So there's quite some balls in the air.

"Nyck is a Mercedes works driver in Formula E but I will never stand in Nyck's way to drive in Formula One," Wolff insisted. "We have no management contract with him, neither do we have an option of taking him back and therefore Nyck can drive in any team."

Speaking on Friday, Horner claimed that Mercedes is causing problems.

"Obviously there's a few hurdles," he said. "He (Albon) has had about four phone calls telling him not to go there from the team next door. I told him to ignore them."

All of which begs the question, why is Red Bull/Horner seeking to place Albon at Williams (or Alfa) when the youngster seemingly wasn't good enough to be retained in house at either of the company's own two teams?