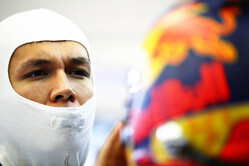 While there is no hope of a drive at either of the two Red Bull teams, Christian Horner is pushing hard to get Alex Albon back on the F1 grid for 2022.

Currently racing in DTM, having scored his maiden victory recently at the Nurburgring, in recent days Alex Albon has been linked with both Williams and Alfa Romeo as the 2022 driver market kicks into life once again.

Speaking at Zandvoort, Red Bull team boss admitted that while there is no vacancy at AlphaTauri - Red Bull having recently confirmed Sergio Perez for a second season - he is working hard to get the Anglo-Thai driver back into F1.

"I hope that nothing prevents him from realising one of those opportunities," said Horner, a clear reference to the fact that Williams uses Mercedes engines and Alfa Romeo is supplied by Ferrari.

"He's a talented driver," he added. "Subject to George moving, now Kimi is retiring, that does open up opportunities. So I'm sure that will get resolved over the next week or so.

"We're looking at external teams," he admitted. "So Williams and Alfa have both expressed interest.

"We're keen to see him back racing in Formula 1. Hopefully that can get resolved over the next few days.

"There's always obstacles," said Horner, admitting that Albon's connection to Red Bull could cause sponsor clashes. "But he's a lad that deserves an opportunity in Formula 1 next year, and we're doing our best to try and help him achieve that.

"There's good discussions ongoing at the moment. So hopefully that can get resolved in the coming days."