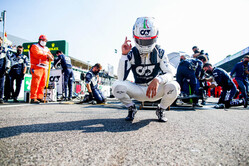 Yuki Tsunoda: "It's a frustrating day. I had quite a good start and had gained a couple of positions before we headed into Turn 4 but unfortunately, I had contact with Kubica and suffered front-wing damage. After I came in to change it, I think I had a good recovery drive and was able to make my way forward. The car felt good today and the pace was quite strong, I really maximised the opportunity of the soft tyre, so I'll take this experience into the race tomorrow. I think it'll be difficult, but I will aim to make my way into the points."

Pierre Gasly: "I'm obviously very disappointed, it's not been a good day. We had a great start on the Mediums, I managed to pass Lando, and also Lewis. Then at the first corner I was a bit surprised by Daniel, I touched the back of him a little bit and damaged the front-wing. I didn't initially know how bad it was, but it broke off completely and went under the car at Turn 3, I couldn't turn anymore and went straight into the wall. The target tomorrow is of course to try and get into the points. I will watch the replay tonight and analyse the possible overtaking spots, as it seemed that it was difficult out there today to make up many positions. We know that anything is possible though, and we'll try our best to come back tomorrow."

Jody Egginton (Technical Director): "After a solid FP2, today's Sprint Qualifying has not been kind to either of our drivers. Contact with the rear of the McLaren damaged Pierre's front-wing on the opening lap, which subsequently failed, sending the car into the tyre barrier. Pierre was out of the race on the spot. Yuki had contact with Kubica, which also resulted in damage to the front-wing and required a pitstop to replace it. This put him at the back, but he managed to recover a few places, which is one slight positive. Ultimately, we have been unlucky and not been able to make the most of the Sprint Qualifying. Looking to tomorrow, the guys are going to be busy repairing Pierre's car for the race and on the strategy side we need to review the options to try and get our cars moving forward in the race, so that we are best placed if any opportunities present themselves."