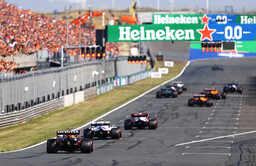 Back on the schedule after 36 years, Zandvoort proves a hit with the current crop of F1 stars.

Despite the red flags, the difficulty in overtaking, the stones, the sand and the fact that traffic will be an absolute nightmare during qualifying, Zandvoort is proving a hit with the drivers.

"Oh man, the track is epic," said Lewis Hamilton, who was quickest in FP1 but suffered an abnormal oil system issue in the afternoon. "It's really fantastic.

"It brought back so many memories when I first got out there," he continued, the Briton a winner here in the Formula 3 Euro Series in 2005. "I knew it was great when I was in Formula Three but it's crazy in a Formula One car.

"It's a real racing circuit," he grinned. "I don't think we'll be able to overtake here, because it's just high downforce super-fast corners which you probably won't be able to follow through, but let's hope."

"They didn't change too much on the track which is good news," said four-time champion, Sebastian Vettel. "The bits they changed, I think they've changed for the better.

"It's very exciting with the banking," he added. "It's not quite clear which line to take yet, but I've got a little bit more time tomorrow.

"We should have more of that, cambered corners that are positive, and not off camber," he continued. "Off camber they do for water drainage, but it's very boring because you lose grip. Positive cambered corners look exciting and feel exciting in the car as well."

"I hope it's good fun to watch, as it's definitely good fun in the car," said Valtteri Bottas, who twice won the Masters of Formula 3 here.

"Tomorrow will be fun in the qualifying and even today," he continued, "I really enjoyed it, those banked corners.

"There's many nice different corner sections here, especially the speed in Sector 3 through the corners is nice, I enjoyed it. It's a track with a nice flow – it's definitely not tricky to find the flow."

"It was honestly a pure pleasure to drive on this track," added Esteban Ocon. "It's good fun, the banking but also just the layout in general. When I drove in 2016, I had great memories from it, and in Formula 1, it's even better. It's pure fun!"

"It's very undulating and all the banking is great to drive," said George Russell. "It's fast, flowing and you can't put a wheel wrong and that is what we all want from a race track."

"The first time I passed the banking in the last corner I experienced something very different with my body... it felt quite cool," revealed Nikita Mazepin. "A new feeling for me, for sure, in Formula One."

Check out our Saturday gallery from Zandvoort, here.