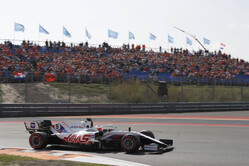 Round 13 of the 2021 FIA Formula 1 World Championship began with practice on Friday at Circuit Zandvoort as teams prepared for Sunday's Dutch Grand Prix.

Friday's track action consisted of two 60-minute sessions - FP1 and FP2 - on the 4.259-kilometer (2.646-mile), 14-turn circuit - the Dutch sunshine welcomed by all after the rain that dogged last weekend's Belgian excursion.

Mick Schumacher and Nikita Mazepin were quick to get going in FP1, Formula 1 cars returning to the seaside track for the first time since 1985. The Haas pair opened their accounts with a handful of exploratory laps on the Pirelli P Zero Yellow medium tires. Progress was short lived however after a lengthy red flag stop due to the recovery of Sebastian Vettel's sidelined Aston Martin. With just six minutes remaining Schumacher and Mazepin were finally unleashed back on track - this time on the Red soft compound. Mazepin subsequently set a 1:13.516 to place 17th with Schumacher directly behind in 18th on a 1:13.847.

FP2 saw both VF-21s exit the garage on the medium rubber prior to a switch to softs for their qualifying simulations. Mazepin duly banked a 1:12.835 before an off at turn 11 beached the Russian in the gravel - his session ending abruptly bringing out a brief red flag stoppage. Schumacher recorded a best lap of 1:12.607 on the softs. The German ended his Friday with a high-fuel long run sampling both the medium and soft compounds. At the checkered flag Schumacher placed 17th with Mazepin 19th on the timesheets.

Nikita Mazepin: "It was a lot more fun than I expected. The first time I passed the banking in the last corner I experienced something very different with my body - it felt quite cool! A new feeling for me, for sure, in Formula 1. Overall, it was quite a challenging day. I was very happy with the car in FP1 and then we made some changes which didn't quite do what we expected given the track has improved. Loads learned and looking forward to getting out there in FP3."

Mick Schumacher: "I think the word rollercoaster really fits for here! It was a decent day, still lots to learn about this new track but I'm sure it's the same for everyone. I still think we need to tweak it a little bit to get everything we can out of it, but I think we're on a good road. We still have some margin but I'm sure we will find it. Things might look different tomorrow but for today we can be very happy."

Guenther Steiner: "A very good track - I think it's very interesting and everyone's very excited about it because it's all new and it's different to the other tracks. In FP1 there was the issue of Vettel being stuck out there, so we didn't do too many laps but the laps we did, all went well. FP2 started well. Except for the spin and ending up in the gravel for Nikita, we had a good session. We're getting a lot of data and drivers are getting used to the racetrack. We just try and learn as much as possible."