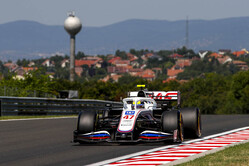 Round 11 of the 2021 FIA Formula 1 World Championship began with practice on Friday at the Hungaroring in Budapest as teams prepared for Sunday's Hungarian Grand Prix.

Nikita Mazepin and Mick Schumacher opened FP1 with a wake-up outing on the Pirelli P Zero Yellow medium tires. Next on the run-plan was a switch to the Red compound for a stint on the softest rubber available - both drivers setting their fastest laps despite a brief stop to the session thanks to a red flag caused by AlphaTauri's Yuki Tsunoda. Schumacher logged a 1:20.383 to place P17 while Mazepin recorded a 1:20.992 for P19. The session concluded with a short high-fuel run to take the checkered - Schumacher remaining on softs with Mazepin utilizing the mediums.

FP2 saw both cars start the session under the blazing afternoon sunshine on the mediums. With a handful of laps banked Mazepin and Schumacher returned to the garage for softs and the start of their qualifying simulation. Unfortunately for Mazepin, a puncture on his right-rear tire forced an immediate return to the pits - the Russian rookie denied a crack at a fast lap. Schumacher produced a 1:19.817 lap on the softs, placing the German rookie P18, while Mazepin's earlier best time on the mediums - a 1:21.881, left him P20 on the timesheet. Both the medium and hard tires were later sampled by each driver in long-distance runs to close out the session.

Nikita Mazepin: "It was a physical day, but we got lot of laps done. Unfortunately, I had a puncture in the afternoon which prevented me from any soft tire running but we compensated and got a very long run. Although it isn't perfect on a track where you can't overtake, there's loads of laps completed, experience and data gathered. Ever since Silverstone, we've managed to stabilize the car well and obviously on a track where you lose the rears, like Silverstone, we've achieved a good pace on long runs. We need to rebalance the car to have more front end in slow speed corners and we'll be good."

Mick Schumacher: "I think it was a positive start in the sense that we were able to accomplish our run plan. Obviously, in terms of speed we're a bit adrift but hopefully if I manage to get a good lap in, we'll be a bit closer to Williams, which is what we're hoping for. We had two very different types of tire wear in the two practice sessions. Today we had 63-degree track temperature - that's the hottest I've ever seen it. For Sunday, the temperature should be a bit cooler and hopefully we will have done enough in terms of research to be able to keep up with the others."

Guenther Steiner: "It was a pretty good session. We had a slow puncture with Nikita during FP2 on his soft tire which we need to look into. No real problem - we just did our job. We got enough data and the guys got to learn the track in a Formula 1 car. So far, all good. Let's see what we can do tomorrow."