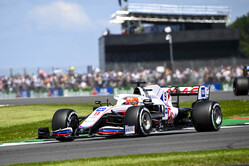 With the grid for Sunday's 52-lap race being set by the classification from the 17-lap Sprint, Formula 1 ventured into new territory when the lights went out and the on-track action began on Saturday afternoon.

Schumacher and Mazepin started the Sprint in 19th and 20th following Friday's traditional knockout qualifying session. Contact between the rookie pairing on the opening lap resulted in a spin for Mazepin at turn three but both cars raced on. Sergio Perez spun on lap six dropping the Red Bull Racing driver down the order, briefly promoting Schumacher up to 18th, but the Mexican clawed some ground back before retiring to the pits on the final lap. As a result, Schumacher finished 18th with Mazepin 19th at the checkered flag.

Nikita Mazepin: "I had a very good launch - one of my best starts this year. The nature of this track means I was on the outside of T2 and then the inside of T3. You try to carry the speed in but the car on the left has a better stopping power and you both try to make the corner but then I had to avoid my teammate. With the pace of the car we have this weekend, the best comparison I have is my teammate and I was a lot faster than him for the first part of the race and then a lot slower for the second part of the race."

Mick Schumacher: "I think we could fine-tune it here and there to try and make it logistically better for us, to be able to change set-ups etc. - but I think for a first try, it was very good. I think for smaller teams it's a bit tougher - we have less time, and we have fewer capabilities compared to other teams who have more people. Unfortunately for us, it was quite lonely out there but still interesting. Now it's up to us to analyze what we can do better to be closer next time."

Guenther Steiner: "For me personally, this was a good experiment - but it's not about what I think, it's about what the fans think. If we come to the conclusion that they like it, then I'm all for it. Our day today was nothing exciting - more of the same I would say - but in the end it was something exciting for this weekend as we had a different format for the race weekend. We learnt something, we have something to think about and we keep a bit of excitement going."