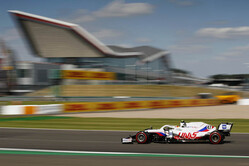 Schumacher and Mazepin exited knockout qualifying after Q1 - with only the top-15 moving on to Q2. Armed with two sets of Pirelli P Zero Red soft tires the team wasted little time in releasing the VF-21's when the session commenced. Schumacher opened his account with a 1:29.846 followed by a 1:29.549 on his first set. Mazepin clocked a 1:30.065 then a 1:29.940 before returning to the pits. With their second set of softs bolted on, Schumacher improved again with a 1:28.738 tour while Mazepin dropped his best lap to a 1:29.051 - the rookies lining up P19 and P20 for Saturday's Sprint.

Much to the delight of the British crowd Lewis Hamilton scored the pole for the Sprint with a flying lap of 1:26.134 in the Mercedes - the seven-time F1 world champion .075 of a second faster than current points leader Max Verstappen of Red Bull Racing.

Prior to Friday qualifying drivers had just one 60-minute free practice session to dial in their cars around the 5.891-kilometer (3.66-mile), 18-turn circuit. Mazepin and Schumacher worked their way through one set of mediums and two sets of softs with some baseline running and qualifying sims. Schumacher's fastest lap in FP1 was a 1:29.227 (P17) with Mazepin recording a best lap of 1:29.808 (P19) - both drivers running the soft rubber on their hot laps.

Nikita Mazepin: "It was one of our better qualifying performances in terms of the balance. I think after having a very frustrating second race in Austria, it was good to get that. It feels a little like Formula 2, where I came from. I have great memories from Formula 2 here last year when I won my first race. There's loads of similarities and I have to say I really like this environment. I generally really like how the weekend goes and I think you just need to see how many people have come out on a Friday, I've never seen that before in my life - so it was really cool to be out there."

Mick Schumacher: "It was positive in one way because we made some changes that felt good, but obviously the pace we have is unfortunately all we've got. Of course, we could've improved here or there but generally it wasn't possible to get into Q2. Still, the work is not done yet. We will keep on pushing, keep on trying and keep working on ourselves. It was interesting to see how everybody was excited to try something new and I'm excited to see how sprint qualifying will go. It's a chance for us if some cars have issues, we might profit from that. As long as we are in the race, we're in contention of starting a bit further ahead than we are now, so fingers crossed and let's go forwards."

Guenther Steiner: "It was a great day today at Silverstone with the crowds back again and Lewis (Hamilton) going on pole for the Sprint - fantastic for the sport. We did our best and more was not possible. We didn't damage anything, and now we're getting ready for tomorrow for the new format of Sprint qualifying. We'll see if there is something for us there. We will try our best."