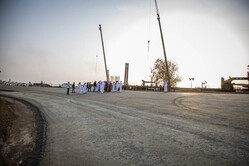 The Saudi Automobile & Motorcycle Federation (SAMF) has revealed the progress made at the Jeddah Corniche Circuit ahead of the inaugural F1 race later this year.

With just 5 months until the Saudi Arabian Grand Prix, members of the local media were treated to an exclusive tour of the track, located on the banks of the Red Sea, by HRH Prince Khalid Bin Sultan Al Abdullah Al Faisal, Chairman of the Saudi Automobile & Motorcycle Federation (SAMF).

Featuring no less than 27 corners, the Jeddah Corniche Circuit stretches to 3.837 mile (6.175 km) in length, making it the longest street circuit in the sport.

Moreover, with average speeds expected to reach at least 155 mph (250km/h), the newest addition to the calendar is due to establish itself as the fastest street circuit on the planet and in the top 5 fastest F1 circuits altogether.

During the tour, reporters were given exclusive access to the various sectors of the Jeddah circuit, including the site of the futuristic 280m-long, four-storey, cutting-edge pit building - due to be finalised by October - that will guarantee spectacular views of the racing as well as the Jeddah waterfront.

Furthermore, they were able to inspect the 12-degree bank at Turn 13 that is currently under construction, providing a tantalising glimpse of the near-future when the likes of Lewis Hamilton and Max Verstappen will take on this remarkable section of the track in their battle for supremacy. 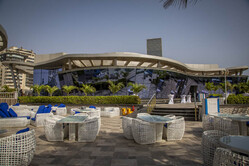 They also got to examine progress at the rapid, DRS-enabled, sweeping stretch that follows the exit from Turn 23, where cars are expected to hit speeds of 200 mph (322km/h) as they head into the crucial final turn of the lap (Turn 27), as well as the beautiful, state-of-the-art Media Island, where the world's press will cover the race from and which looks directly on to this high-speed section of the circuit.

Developed in partnership by Tilke Engineers and F1's own Motorsports Division, the circuit design has made strong use of the long, sweeping roads along the Corniche area, utilising this feature and existing roads as much as possible along the narrow stretch of coastal land, resulting in one of the most unique and challenging circuits yet to feature in F1.

An atypical street circuit, fast flowing with high speed esses and chicanes as well as long full throttle sections, the Jeddah Corniche Circuit is designed to deliver spectacular racing and is sure to generate huge excitement for fans and pose a stern examination of the drivers' skills.

"We were delighted to invite our friends from the media to the site of the newest street circuit in Formula 1 to witness for themselves the progress that has been made since we first broke ground in March," said Speaking after the tour, HRH Prince Khalid Bin Sultan Al Abdullah Al Faisal, Chairman of the Saudi Automobile & Motorcycle Federation (SAMF). "It is incredibly exciting to consider that in 5 months we will see the greatest drivers in the world race here under the lights on what will become the fastest street circuit on the planet. 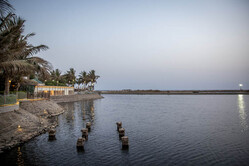 "It is my sincere hope that this tour has enabled our media guests to see just how much combined effort and planning from our highly educated, talented and diverse workforce is going into the construction of this world-class racing venue and that it will help them experience the same level of anticipation and excitement as we are ahead of the arrival of the pinnacle of motorsport in Jeddah in a few months' time.

"This modern, exhilarating and high-speed circuit stands as a physical representation of the goals we have set for ourselves as part of the Kingdom's Vision 2030 programme that aims to build a better country, fulfil our nation's dream of prosperity and unlock the talent, potential, and dedication of our young men and women.

"We can't wait to see this magnificent track come to life to the beautiful sound of roaring engines and passionate fans in December."