It will be like this for the rest of the season, predicts Verstappen 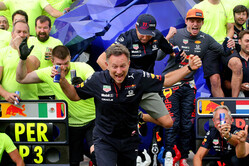 Championship leader Max Verstappen predicts that his intense battle with Lewis Hamilton will last for the rest of the season.

Finally, it would appear that Mercedes and Lewis Hamilton are facing a sustained attack on their domination of the sport.

The French Grand Prix was the latest round in a championship battle on which few would be willing to bet serious money, and Max Verstappen believes the title fight will continue for the rest of the season.

"As you could see, the whole race we were fighting each other," said the Dutchman, who on Saturday, after claiming pole, had said that if Red Bull could win at Paul Ricard, traditionally a Mercedes strong hold, it could win anywhere.

"I think it will be like this for the rest of the season," he added.

"At the beginning, it was super difficult out there with the wind," he continued. "One lap we had an okay balance but then the next lap we were just sliding everywhere. It was really difficult to keep the car stable.

"Once we made the first pit stop then you could clearly see, on the hard tyres, they were pushing me hard from behind,” said the Dutchman. "But then when we made the call to do the two-stop then in the end that paid off.

"It was difficult because there was quite a lot of back markers to go through," he said of the cat and mouse battle with Hamilton, "but luckily they did well and we could have a good fight to the end. We had to work hard for it but, of course, but very rewarding."

Asked if he'd enjoyed the race, he laughed: "Towards the end, yes!"