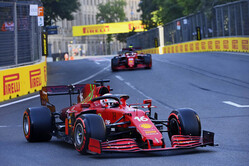 While the Monegasque's Monaco outing was over before it had even begun, the youngster sidelined by a gearbox issue, in Baku he was soon overhauled, going on to finish fourth, albeit benefitting from Max Verstappen's puncture and Lewis Hamilton's errant finger.

Such was Leclerc's strength in qualifying, and the Ferrari for much of the Baku weekend, some have wondered if the Maranello outfit is on the cusp of taking on the 'big two'.

Not yet, admits Binotto.

"But we are progressing," he insisted. "We are progressing because eventually we are learning about the car, we are exploiting it better compared to the start of the season. And we know that there will be some developments coming in the future.

"So overall, I think that's where we are," he added. "In the race I think we were hoping for a better pace overall, seeing the qualifying."

"We knew that on the soft, we would have struggled," he admitted, referring to the Baku race. "I think as a matter of fact, we struggled the most with the soft.

"On the hard tyres, when in free air, and I think Carlos in free air pace was representative, we were competitive," he added.

"Certainly we still need to improve our pace in the race, no doubt. But I don't think that overall, we were poor in performance when in free air.

"We were suffering in the dirty air, which both drivers mentioned, and that's where we need to focus our analysis."