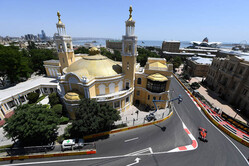 Scuderia Ferrari Mission Winnow got through all its planned programme for Friday free practice for the Azerbaijan Grand Prix with the priority being for the drivers to get comfortable with the Baku City Circuit and its walls. Between them, Carlos Sainz and Charles Leclerc completed 86 laps, using all the available tyre compounds and evaluating two different aerodynamic configurations.

In the first session, Charles and Carlos completed twenty laps each. They started out on the Hard tyres, waiting for the track to clean up after a lot of dirt had blown onto the circuit with the strong wind over the past few days. When the conditions improved, both drivers switched to the Softs, setting their best times: 1:43.227 for the Monegasque and 1:43.521 for the Spaniard. In the final minutes, the team decided to switch them back to the Hard compound to work in race configuration.

In the afternoon, the programme continued with Sainz and Leclerc going out on the Medium tyres, with which Charles did a 1:43.162 and Carlos stopped the clocks in 1:43.210. After a red flag period, when Latifi stopped on track, Sainz and Leclerc went back out on the Soft tyres for a qualifying simulation. Naturally, their times improved: 1:42.243 for the Spaniard and 1:42.436 for the Monegasque. Then came the only unplanned moment of the day, when Charles hit the barrier at turn 15, damaging the front wing. Apart from that, the car was fine and he was able to drive quickly back to the pits and then go out for a race simulation, as did Sainz. Carlos, who also tried the Soft tyre with a heavy fuel load, completed 24 laps, two more than Charles who only used the Medium compound on his long run.

Carlos Sainz: Today we were a bit quicker than we had expected. However, the time sheets can be misleading, with cars getting tows on the straights - myself included - and others not finishing flying laps for various reasons. Still, it was an encouraging first day for the team here in Baku.

Tomorrow afternoon will obviously be a better indicator ahead of qualifying, so we need to work out where we can gain a bit of lap time on the short runs, as well as finding a good compromise to make the tyres work on the long runs. There could be opportunities this weekend and we need to be ready to make the most of them.

Charles Leclerc: It was definitely a better day than we expected, but it's only the first day of practice.

The pace looked promising, and we will keep working overnight to be as competitive tomorrow. I felt quite comfortable in the car today, especially in terms of braking, maybe even too comfortable, pushing a bit too much into turn 15. But in the end, that's what free practice is for - testing the limits. I was on a good lap there and we will see what we can do tomorrow.

Our main competitors are quick, even though they haven't shown it yet. We have to make sure we do everything perfectly. We have to maximize our potential and hopefully we can have a good qualifying.