"It's a difficult one to take," admits Leclerc 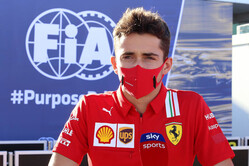 Once again, Lady Lucky turns her back on Charles Leclerc as he fails to start home Grand Prix.

Last night, Racing Director, Laurent Mekies admitted that a sword of Damocles was hanging over the team despite Charles Leclerc taking pole position.

He was referring to the fear that the youngster may have incurred gearbox damage in the crash that brought Q3 to an early end.

However, following an initial inspection last night that appeared to show no damage, a more thorough investigation this morning meant Leclerc got the all-clear.

Alas, heading out when the pitlane opened for today's race it became clear that there was an issue after all. Though he made it back to his garage, fears that the youngster might need to start from the pitlane gave way to the reality that a "left driveshaft" issue meant he wouldn't be able to participate.

"In the garage, it was very, very difficult to feel OK," Leclerc subsequently told reporters. "I guess now I'm getting used to this feeling here, unfortunately. I've never finished a race here... this year I don't start it, (despite) starting from pole.

"It's a difficult one to take," he admitted. "But I also feel for the team to be honest, the mechanics have done such a hard job yesterday to try and check everything. The mechanics were finally a bit happy this morning to see that everything seems fine, and all of the parts were fine. And then this happened. It's a shame for everyone."

As for details on the exact nature of the issue and why it wasn't picked up on earlier, after all, even a grid penalty would have been better than a DNS, Leclerc said: "I wouldn't speak too much, because for now I am not aware of everything.

"But what I know is apparently it's not coming from the gearbox, it's more coming from the rear left of the car. Whether it's related with the crash or not, this we'll have to see with the investigations after the race.

"It's still early days to speak, I guess."

Despite being forced to watch from the sidelines, Leclerc was among the first to congratulate race winner Max Verstappen following his victory.