"It was a big mistake," admits Bottas 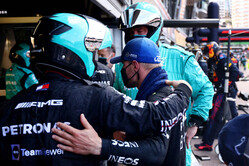 Losing a podium position was bad enough, but the manner in which it was lost bordered on the farcical, and Valtteri Bottas admits it must never happen again.

When Mercedes went for the undercut on Pierre Gasly, and Lewis Hamilton actually lost out not only to the Frenchman but Sebastian Vettel and Sergio Perez also, one could rightly assume that the German team was in for another of those 'bad days' it has from time to time.

However, things went from bad to worse just one lap later when, during Valtteri Bottas' sole pit stop, the right-front wheel was machined on to the axle.

In the space of two laps, Hamilton had dropped from 6th to 8th, on this most difficult of tracks, whilst Bottas, who was running second at the time of his stop, was out.

"Sitting in the car at the pit stop, I knew it was a slow one," said the Finn, "and I was calculating Sainz getting past, then Norris, and when it got to 30 seconds, I couldn't believe it.

"It was a big mistake by us, as a team, to learn from," he subsequently told reporters. "If it is human error or a technical issue, it doesn't matter, we need to find the solution.

"If it's a human error, we need to support the guy who did it, but we need to learn from that, that's the main thing in my mind. And, at the same time, I'm super-disappointed.

"The start was good," he said, the Finn having been quicker off the line than Verstappen. "Max, he defended and I had to lift.

"The pace was good," he continued, "I felt the tyres at Red Bull they lasted a bit better today, the soft tyres, so he pulled a gap towards the end of the stint.

"The nut was damaged to the point where it was never going to come off," explained Andrew Shovlin, the German team's trackside engineering director, "so we had no option but to park the car."

Toto Wolff subsequently adding that it had "never happened to that extent before" and is "something we need to understand".