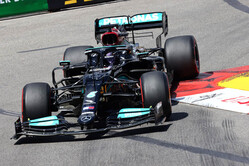 Following a disastrous Monaco Grand Prix which sees Mercedes lose the lead in both championships, Lewis Hamilton insists that his team cannot afford any further mistakes.

When Toto Wolff and Lewis Hamilton kept insisting that Red Bull was favourite to win in Monaco, their comments were put down to their (annoying) habit of attempting to play the underdog, whilst - none too subtly - applying pressure to the opposition.

However, following a disastrous weekend in the Principality, perhaps they had a point.

Hamilton, who had struggled all weekend finished a distant seventh, only just managing not to be lapped by his title rival, whilst teammate, Valtteri Bottas suffered a retirement of almost comical proportions when a wheel nut machined during his sole pit stop meaning the wheel could not be removed.

"Sitting in the car at the pit stop, I knew it was a slow one," said the Finn, "and I was calculating Sainz getting past, then Norris, and when it got to 30 seconds, I couldn't believe it.

"It's obviously hugely disappointing," he added, "and we need to learn so it never happens again.

"As a team, it will be a priority for us to improve our pit stops moving forward," he continued. "Our pit stops haven't been our strongest point this year - there's no one to blame, as a team we just need to be better."

Hamilton was equally critical of his team, for other than his continued struggle with grip, due to his inability to generate sufficient heat into his tyres, the decision to try and undercut Pierre Gasly went disastrously wrong, allowing Sebastian Vettel and Sergio Perez to get ahead.

"It's going to be tough," Hamilton told reporters. "I told you at the beginning, they've got a championship-winning car, and they're going to be very hard to beat.

"I've been serious about it all year," he continued. "We've won races which we shouldn't have won, like in Bahrain.

"But it's not over," he insisted, "there's a long, long way to go. But we definitely can't afford another weekend like this.

"But I'm grateful I've finished," he admitted, "and grateful I finished and got some points, fastest lap... every little point that you can get on a bad weekend like this, hopefully can count towards something at the end.

"In the last races we've generally been good on tyres, but this one particularly we've been weak. That's an area we need to understand and rectify for the future.

"This has never generally been a track for us, we have the longest car, it's like a bus to turn through the corners, it's not as nimble on a small track like this but it's great elsewhere. There are things that don't work here which bode well for the other circuits.

"We've had some good conversations through the weekend, but it's not good enough from all of us, we win and lose as a team, and collectively it's not a good job from all of us, across the board, and we don't take it lightly.

"There's no point getting all depressed, we have to look at data and figure out why we're in this position, we'll be in calls over these next days when we get analysis. We all want answers within the team.

"I know everyone will be working flat-out to make sure that hopefully this kind of weekend doesn't happen again."