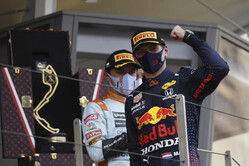 Red Bull's Max Verstappen claimed the Monaco win with a one-stop soft-hard strategy from what effectively became pole position, after the original polesitter (Ferrari driver Charles Leclerc) was unable to start. Verstappen's win also moved him into the lead of the drivers' standings. Ferrari's Carlos Sainz finished second while Lando Norris was third for McLaren.

The top six all adopted the same soft-hard strategy, but both the P Zero White hard and the P Zero Yellow medium tyres were also seen at the race start.

All the drivers stopped only once, with the exception of Lewis Hamilton, who finished seventh for Mercedes with a late second stop to claim the fastest lap on P Zero Red soft tyres.

Aston Martin's Lance Stroll started on the hard tyre and ended up eighth after stopping on lap 58 without losing track position. Alpine's Esteban Ocon started on the soft tyre but switched to the medium after 37 laps to finish ninth: the only driver to run this strategy.

Weather conditions were slightly warmer than they had been yesterday and were more similar to free practice on Thursday, with around 20 degrees ambient and 40 degrees of track temperature.

Mario Isola: "Monaco provided quite a few surprises from start to finish with all three compounds seen at the start, as well as three different teams on the podium and four different strategies in the top 10. This underlines how all the tyres brought here were suitable race tyres that played an important role. Nonetheless, the soft to hard strategy used by Verstappen and all the top six proved to be the most popular run plan. Quite unusually, there were no safety cars in Monaco this year, which often influence the strategy, but from the tyre point of view, we're satisfied with the performance. This was demonstrated also by the race lap record from three years ago being broken by Hamilton on softs towards the end of the grand prix. Congratulations to Verstappen for the win, and also for leading the championship for the first time."