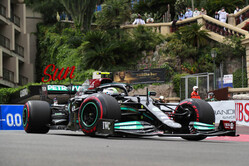 Valtteri is forced to settle for P3 after a red flag curtailed his final qualifying lap and brought Q3 to a premature end. Lewis starts in P7 on a difficult day with his car lacking grip throughout the session.

Valtteri Bottas: On Thursday and even in practice this morning, I didn't have the greatest feeling in the car - we were still struggling with the tyre warm-up and mechanically, the car just isn't made for tracks like this. But I think we maximised everything set-up wise for Quali, we made some changes and I felt comfortable. As qualifying progressed, I saw that we had a chance for pole position so it's a shame I never got to finish the last run - I guess we'll never find out if it was enough but it was a good lap up until the red flag, I was a tenth or two up.

It is great to see many teams out there competing at the front, it's exciting and we are all pushing so much on the track, trying to make every small gain we can. I am sure tomorrow will be a tight battle.

Lewis Hamilton: The car didn't feel too bad on Thursday but we made some changes and it felt terrible today, so we'll have to go back to the drawing board. From my point of view, I just had such a lack of grip out there, which then leads you to try to overdrive and start pushing to get more from it but to no end - it just doesn't improve. So overall, a difficult day. Obviously Valtteri was able to get something out of the car but we have definitely had some problems today.

It's almost impossible to overtake here and from where we are, that's pretty much the case when everyone is running at the same speed. Saturday really is the day. I guess the minimum would be, hopefully, seventh and then we have got to try and somehow see if we can move forwards.

Toto Wolff: It was not a good day for us overall and we need to find out why we couldn't get Lewis' car in a happier place. It was a shame for Valtteri - he was two and a half tenths up on his final lap and had a great chance for pole but crashes happen here in Q3, it's when the drivers are pushing the most.

For the whole day we struggled to generate grip with Lewis' car and it cost him confidence in practice and that carried over into qualifying; we'll work hard to understand why. With Valtteri's car, he was happier in the morning session, could build confidence and his car seemed to be in a better window. Tomorrow will be a tight race, we need to stay patient and look for any opportunities to move forward.

Andrew Shovlin: A frustrating day for both sides of the garage. Valtteri was doing a great job and really getting everything out of the car, he'd been solid all session and had found quite a bit of time on his final run when the session was red flagged so he couldn't finish his lap. Lewis had a more difficult time and was unable to build tyre temperature as well as Valtteri. We'll have to look at that as there isn't anything obvious in their setups to explain it.

P3 and P7 are not the positions where we wanted to be but the race pace and degradation will still be a feature of the race tomorrow and we've shown this year that we are good in that regard - hopefully we can use that to our advantage.