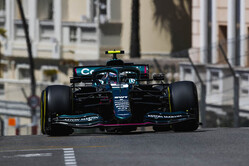 Sebastian Vettel has explained the meaning of his emotional radio call during free practice.

On a day the more experienced drivers appeared to shine, moments after going tenth, the German told his team: "It feels like my eye is bleeding... I don't know what...

"It's alright," he added. "I'll carry on... either I'm super emotional or there's something stuck in my eye!"

With some of his errors over the last couple of seasons leaving his many fans a little emotional at times, one wondered if things were getting the better of the German, a two-time winner on the streets of the Principality.

"Well, not like bleeding, more like tearing up a lot," he subsequently explained to reporters. "That's why I said, 'I must be feeling emotional', because there were tears and more tears, so I was blinking the whole lap... not ideal on a track like this."

Indeed, feeling his pain, his team made him a paper eye patch to see him through the remainder of the weekend.

"The team was quite nice, and they made me this," he grinned, producing the batch, which bore the slogan 'Monaco 2.1'. "So, I probably think I'll keep that, and it will keep me safe for the rest of the weekend."

"I was quite happy," said the German. "We got into a rhythm quickly, and then as I said, in the afternoon, lost a bit of vision, but overall it's okay.

"It will be tight," he admitted, "it's always tight here and it's obviously tight in the midfield and hopefully we can be at the forward end.

"Hopefully we can keep that up and get everything together. It's all about Saturday afternoon, which is not tomorrow, the day after tomorrow, so a bit of time.

"We tried some bits, and like Monaco usually, you have a bit of stop and go, not getting the laps, that's for everyone. It will matter on Saturday afternoon to get everything in that one lap."