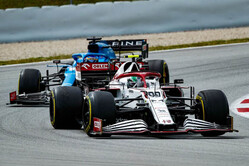 If it sounds repetitive, it is because the sense of deja vu is real. Another Sunday, another race with almost non-existent attrition in which we went close to a top ten finish, but couldn't break into the points. Another Sunday, the fourth this season, in which we showed we can fight with all the cars in the midfield, but we are left just outside the positions that count.

Another P12 obtained with grit, determination and putting up a fight until the chequered flag, with Kimi Raikkonen making up three places in the final stages. Another race in which an unfortunate incident - a deflating tyre during a pit-stop - took out one of our cars from being deservedly in the battle for points.

We close the first four races of the season with no points on the board, but with the knowledge that, if we come knocking every race weekend, being the best placed to pick up the pieces should anything happen, the top ten results will come soon enough. Two weeks to regroup now; two weeks to make another step forward. Monaco next.

Frederic Vasseur, Team Principal: "Today was another race in which we proved we can fight with all the cars in our section of the midfield, but we came home with nothing to show for it. To end just outside the points in a race with just one car failing to finish shows we are in the right place to benefit from any trouble, but we know we have to still improve to make it into the top ten on pure merit. We don't lose heart, we have made a lot of progress already and we do not intend to stop now."

Kimi Raikkonen: "We did the best we could with a car that actually felt quite nice. I had a decent first lap, making up a few places, and then went for a long first stint. We were always planning for a one-stop and I think the strategy was the best we could choose today. Unfortunately, we went really close to the points once again but didn't get anything out of the race. Only one retirement didn't help us, but we need to keep working to find the little bit that is still missing."

Antonio Giovinazzi: "It was not an easy race, which was effectively compromised by the issue we had during the pit-stop. To lose all this time and a new set of tyres was a blow, especially as I had to follow a delta behind the Safety Car and couldn't catch up with the pack. After that, I tried to make up as much ground as possible, but with not much happening in front of me, 15th was as far as I could go. Our race pace wasn't bad, but it ended up being a frustrating day: hopefully Monaco will be better - I am looking forward to it already."