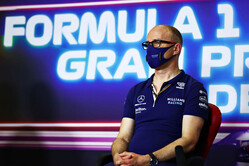 Fred, why don't we start with you? Good to see Robert back in the car this morning for FP1. It didn't end well but it would be interesting to hear what he said about the car?
Frederic Vasseur: Yeah, well, for sure he was a bit too optimistic at the end of the session, but on the other hand he did a very good first stint. He was directly on to the pace, and it was good to have another feedback and a new push like this and we did the same last week with Callum and Callum also did a good job and it's also a good approach.

You mention last week. Start of the race: tell us about your reaction to what happened on lap one in Portimao?
FV: I was quite close to buying a dog for Kimi, or a stick! For sure, it's a shame but the circumstances were like this and he had to make some changes on the steering wheel and he was more focused on the dash than on Antonio but it is what it is.

What happens in that situation because Kimi told us yesterday that he didn't stay around...?
FV: Ah, what's happened is that when we went back after the race, Kimi was the first one to apologise and this could happen. For sure he didn't do it on purpose.

Was Antonio's car carrying any damage at all?
FV: No, we were very scared about the puncture. He had a small damage on the floor on the rear of the car but it was not a big one.

Let's talk about car performance now. After the race Giovinazzi said 12th is about our level at the moment. Do you agree with him or is the pecking order is going to fluctuate from one race to the next?
FV: It's so tight between P6 and P16 or P17 or P18 that at the end, from one week to the other one you can move from Q3 to the back of the grid. Even from quali to the race that you have big changes and for sure in that situation we have to do the perfect weekend, without any mistakes, to score points. To have a DNF in front would help for sure but it was not the case last week. But we have to be focused on our job and to avoid to do a small mistake as we did at the last couple events.

How difficult is it to extract performance from this car, because there was a lot of optimism after testing, and yet it's always been as Antonio says, P12?
FV: Yeah, but we did a huge step forward in terms of pure performance compared to last year. Last year in Barcelona we were something like 2.8% off in P1 and we are 1.5% this morning. It's half the gap. Now, race specification is a different story. You have to be at the right place at the right moment, you have to avoid any mistake and perhaps we are struggling today to put everything together, but I'm not worried. As long as the pace is there it will pay off.

Fred, Jan Monchaux said last weekend that Antonio has stepped up this year. Do you agree and just tell us a little bit about how Antonio has grown as a driver and his influence on the team now?
FV: It's not easy to start alongside Kimi, for sure. Probably he struggled a little bit at the beginning, to find his own place, but now he's getting more and more confident, he's doing the job in qualifying and into the race he did a very strong performance last week, to finish I think it was four or five seconds behind Sainz and Pierre, for it's a good result on our side. For sure, we were P12 and that's not the goal at all but if we are able to finish all the races just behind Sainz, I think that we will score points.

Simon, can we start by throwing it back to Portugal where it was a tough race for you guys? How much of a surprise was that?
Simon Roberts: It wasn't such a surprise. We were, I guess, over-optimistic, having had such fantastic qualifying but the true pace of the car never really changed. We had a good start - George had a good start. If it hadn't had been for the red flag - who knows? That was kind of the race pace, those conditions on that day... it was quite unique conditions in Portugal and you saw in Imola, two weeks before, it was the same car but it was much more competitive. I think we were disappointed because we were so optimistic but the reality is, when you look at the data, it was less of a surprise.

Now both drivers have talked about the sensitive nature of the car; what are you guys doing to cure it? What can you do?
SR: Well, we're doing everything we can. The challenge with these cars, with the combination of a lot of homologated components and then some mandated changes to the floor and rear brake ducts, the first thing we did which the guys at the factory and the girls at the factory, was recover as much performance as we could to try and make our car competitive. I think - and the data shows we have done that. The car is a better car than it was last year. The down side is that it's more sensitive so occasionally that gets exposed, other times it doesn't. It's a combination of circumstances really.

Let's look at some positives now because we haven't had you in the press conference since you guys had a great run - didn't end well really in Imola but in terms of pace and qualifying, both cars through to Q2. That was a big step, especially for Nicholas, so can we talk about him? How's he grown and evolved as a driver from last year to this?
SR: Yeah. Last year was his first season and everyone learns a lot in their first season but he's come back into this year really super-positive, full of determination and super-fit and I think we can see that. Nothing revolutionary, just a really nice build on everything he's been doing and all the support he gets, it all works, yeah, it's really good to see.

There have been a few job ads going around for Williams, especially in the aerodynamics department. Tell us a little bit about that; is it targeted at 2022?
SR: So it's part of our transformation. The objective is to rebuild Williams back to a much, much better condition and there's no silver bullet, there's no quick wins. As you know, we operate underneath the cost cap so luckily, unlike other teams, we've got some flexibility and some headroom, so it's part of a strategic plan and it's just addressing things which we think will make a real difference going forward.

Mario, thanks for waiting, we've been to three very different circuits so far this year. What have you learned about the new constructions and how they're performing?
Mario Isola: I believe that the new construction is working as expected. We can use at a lower pressure, that was one of the targets, to have a more robust tyre. In terms of performance. It's difficult to give you feedback because there are also changes on the cars that are obviously affecting the performance. I will say that only Portimao was a bit different compared to other races, probably because of the type of tarmac in Portimao, but for the rest, I would say that the result and the feedback is in line with our expectations. Now that the team have had the opportunity to balance the car to spend time on the set-up, which was not possible last year while testing, during free practice, they start to learn the new construction better and start the performance with the new construction.

You've just said that Portimao wasn't an outlier but Lewis said after the race in Portugal that he was able to push harder for longer. How much satisfaction does a comment like that give you?
MI: That was one of our targets when we decided to nominate C1, C2 and C3, knowing that, knowing as I said, the tarmac in Portugal is quite unique, with a very low micro-roughness and very low grip, which means that the cars are sliding but due to the track evolution during the weekend and probably the temperature that was a bit higher compared to the rest of the weekend, the hard compound was the key or the surprise of the race and Lewis was able to push, that is what the drivers are asking of us and it's also what we addressing for next year with 18 inch tyres.

You've brought the same tyres here to Spain; it's a more abrasive circuit, so what can we expect to happen here?
MI: It's a completely different circuit. We have also to take into account the new turn 10 because we know the sector three in Barcelona is the part of the circuit that is over-stressing the rear tyres with some sliding and overheating. With the new turn 10, I believe that the layout is going in the direction of helping the rear tyre a little bit, but it's probably a two stop race, as it was last year, for the majority of the competitors. Then we see what happens during the weekend in terms of temperature. Last year we came in Barcelona in August, it was much warmer than our expectations for this weekend. There is also a very low chance of rain for Sunday. Probably it's not going to rain but cooler conditions for Sunday and teams have to collect important elements during practice to define the strategy for the rest of the weekend.

Mercedes were testing the 18 inch tyres at Imola after the race. What feedback did you get from the team and the drivers?
MI: We have positive feedback with the characteristics of the new tyres in line with the drivers' expectations and with previous tests. It was very important to confirm, on different circuits and different cars and drivers that we get the same feedback for the new product. Don't forget, we have to build one tyre for 20 different drivers and ten different teams so the tyre is the best compromise across all the teams and the confirmation from Mercedes on the best option that was also the best option for Ferrari, for Alpine, is a good starting point because now we have the possibility in Barcelona, after the race, to start focusing on compounds and then we want to develop a new family of compounds with completely different characteristics in order to reduce overheating... not having overheating is almost impossible but the target is reduce overheating and degradation and design a tyre that is in line with the target letter which was also written together with the drivers.