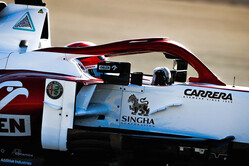 Alfa Romeo has been given the right to have the penalty issued to Kimi Raikkonen in Imola - which demoted the Finn for 9th to 13th - reviewed.

On the lap before the re-start following the race suspension, Raikkonen spun at Turn 3 and Art 42.6 of the Sporting Regulations indicates that a driver may retake his position, so long as he does so prior to the first safety car line (SC1).

Initially the team instructed Raikkonen to do so, but then told him to hold his position.

Art 42.6 then indicates that should a driver fail to take his position he must enter the pit lane and can only re-join the race once the whole field has passed the pit exit, while Art 42.12 indicates that during a rolling start, once the safety car turns its lights out, "no driver may overtake another car on the track until he passes the line..."

"The rule requiring a car to enter the pit lane if it fails to regain its position is consistent amongst several championships, and has been in the Sporting Regulations for several years and has been consistently applied," said the Imola stewards, who deemed that "the penalty is a mandatory penalty", and therefore felt they had no alternative but to apply the penalty for reasons of consistency.

In granting the review however, the FIA admitted that while its interpretation was based on similar offences in F2 and F3, there had not been an occasion when a rules breach had happened following a red flag.

"Subsequent to the decision and as part of this present hearing, the Stewards have discovered that the specific cases that they referred to were not following a Red Flag.

"While this was only one element among many considered by the Stewards, this information was unavailable to the Competitor at the time of the original decision and was a part of the discussion by the Stewards and is therefore deemed significant and relevant."