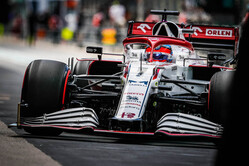 The first day of action in Portimao was a veritable rollercoaster - and not just because of the undulating nature of the Algarve track. A surface that started very slippery improved as the day went on, but changes in the direction of the gusty winds in the afternoon added a level of trickiness to the sessions. This made it really hard to get the data required by the engineers in the garage.

On the other hand, there were undeniable highs, with newly-announced additional reserve driver, Callum Ilott, making his debut in an official race weekend session; the Brit delivered a consistent and promising performance. Furthermore, we got two, glorious hours of running on such a brilliant circuit, whetting our appetite for the rest of the weekend.

Friday results are not to be trusted and tomorrow's picture may be very different; as always, we'll retire to our trucks to crunch data, trying to squeeze every drop of performance from the C41 ahead of qualifying. Saturday is when things start counting: after a rollercoaster Friday, we're aiming for a slightly smoother ride...

Kimi Raikkonen: "It was not the easiest of Fridays and we have some work to do before we are where we want to be for qualifying. The track was quite green and the wind, especially in the second session, made it difficult to find proper reference points. We tried some things to improve the balance of the car in FP2, hopefully that gave us enough data to make a step forward overnight. We'll see if it's enough tomorrow."

Antonio Giovinazzi: "Jumping in the car for the first time in the difficult conditions we had in FP2 is always hard: the wind gave a very inconsistent feeling, especially when the car is light, but we still have one night to look at the data and find something to improve. We'll see tomorrow where we stand in qualifying, our aim remains the same - to get to Q2 and play it from there - and we know we can make the step forward needed."

Callum Ilott: "I really enjoyed being in the car today. The team made it as easy as possible for me to hit the ground running and it was an excellent opportunity to gain experience, make the most of this hour and help the team gather data for the weekend. This is not an easy track, but I was able to build confidence with every run. The first run on hard tyres was good and I was able to get comfortable with the car; when I made the jump to softs I was a bit caught out at first as there was a big grip increase, but I was able to get more of a feeling for where to exploit the grip towards the end of the session. Having worked with the team in the past really helped: all in all, it was a successful day, running consistently and learning a lot."