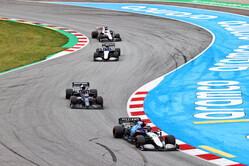 George Russell finished 14th and Nicholas Latifi 16th in the Spanish Grand Prix. The Brit started 15th and the Canadian 19th, both on the soft Pirelli tyre.

George ran a two-stop race, pitting on lap 9 under the Safety Car and once again on lap 28, each time for the medium compound. Nicholas ran a three-stop strategy pitting for the medium tyres on lap 8 and 27 before finally stopping on lap 50 for a used set of the soft Pirelli tyre.

Dave Robson, Head of Vehicle Performance: We enjoyed today and were able to race with some high-quality midfield cars. The opening stint was tough, but the early safety car presented an opportunity and we were able to capitalise on the slow pitstop that Giovinazzi had by pitting both of our cars. George and Nicholas both showed good pace on the Option tyres and George, as the lead car, was able to pull away and avoid a lot of the blue flags and attacking cars that subsequently pitted behind us. Nicholas pitted a third time to protect his position to Giovinazzi and the Haas cars. Meanwhile George attempted to thread a needle between managing his tyres, attacking Alonso and defending from the cars behind. In the end it was an impossible task, but we are pleased that we could race hard and that we got ourselves into a strong position. Once again, the top-10 was agonisingly close, but this only increases our appetite and motivation to push everything out of the FW43B for the rest of the season.

George Russell: We have to be satisfied with the job we did today. The car in the race today felt good and I felt really confident, however the result doesn't quite reflect that, as we started P15 and finished P14. We were on the one-stop and the guys around us were on the two-stop. I was battling with Fernando (Alonso) trying to pass him and the guys behind me were on the brand-new soft tyres which were much faster. As soon as I got passed by one, they all came past. The tyres were on the limit, I was on the limit and the car was on the limit. That was the maximum and I am really pleased we opted with that strategy as it gave us half a chance. We were so close to a much better result and hopefully we have more of these race weekends. To be battling there on merit was a great job.

Nicholas Latifi: As we expected, it was a challenging race out there. However, even though the pace isn't where we want it to be, I'm happy that the most important session of the weekend was the one that the car felt best in. With a strong strategy and some good overtakes on track we also managed to get in front of both the Haas cars. I think we're ending the weekend on a high, but we've also got quite a lot of homework to do before Monaco.