"The less said the better," says Lowe of Williams return 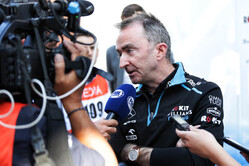 Admitting that his return to Williams was "unrewarding", Paddy Lowe believes the family should have sold up earlier than they did.

Having been part of the team in the early 90s when Williams was sweeping all before it, largely courtesy of the active suspension which he oversaw, though nobody expected Paddy Lowe's return to the Grove outfit to reach such dizzy heights again, surely nobody foresaw it becoming the disaster that it was.

Lowe left Williams in 1993 for McLaren, working his way up to the role of technical director by 2011. In 2013 he left Woking for Brackley, joining Mercedes as executive director mid-season.

In early 2017, the German team announced that the Briton had been tending his garden, and as it prepared to welcome James Allison, Lowe subsequently announced his return to Williams as chief technical officer and shareholder.

The first two cars built under his watch proved to be amongst the biggest duds ever produced by Britain's most successful constructor - in terms of constructor titles - the Grove outfit slipping to the bottom of the timesheets and the standings.

As things appeared to go from bad to worse, the team missing the opening days of testing and various other deadlines, in March 2019 it was announced that Lowe was taking leave of absence, the Grove outfit citing personal reasons. Three months later it was announced that he was no longer part of the team.

Speaking to the Beyond The Grid podcast, Lowe admits that his second stint was "unrewarding", while claiming that the Williams family should have sold the team earlier.

"It's a period I don't really like to dwell on to be honest," he says, "because in all of that time in Formula 1 - which I loved every single year and all for different reasons - in some ways it just got better and better.

"Those two years at Williams I didn't enjoy to be honest," he continues, "it was really hard work for no reward whatsoever.

"That means if you miss a trick and certainly if you're not doing the right things for a long period of time, you can't expect overnight recoveries. It doesn't matter.

"It's not a human point," he insists, "I'm good at a lot of things, I think I've proven that in a number of areas, but I can't work miracles and certainly not miracles in respect of time."

From the outset of the hybrid era, Williams had the all-conquering Mercedes power unit, and Lowe believes it was the superiority of its engine that initially made up for the shortcomings of the team.

"Williams had the benefit of the best engine by a long chalk from 2014, so that gave some, let's say, false impressions of underlying performance," he says. "They were living off a number of other legacy advantages that gradually unwind.

"When the organisation starts to lose its way because it hasn't had the right investment or made the right decisions, it doesn't instantly make bad cars. The unwinding is equally slow as the winding."

Referring to the sale of the team to Dorilton Capital and the departure of thwe Williams family, he admits: "I was pleased (at the sale), because that's what they've needed to do for a long time and to be honest should have done it earlier for all sorts of reasons which are not to do with any individuals.

"The team has been in a very negative spiral from a funding point of view," he continues. "While I was there I was watching that spiral progress further down the drain and it's actually quite distressing because you understand that there's no good end point apart from sale, so you may as well cut that now and move on before it's all gone.

"I'm very happy that the team was sold for a reasonable price and so that Claire and her brothers can leave with something to work with from the great things the family has achieved over the years.

"The name is kept and they've got new investors who will have the cash to take it forward and turn that spiral in the other direction which will be a long process and people that are patient will take it there."