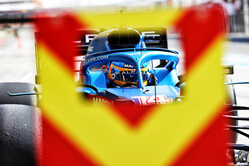 Fernando Alonso has clarified a comment made earlier in the week when he suggested he was better than the likes of Lewis Hamilton and Max Verstappen.

Eyebrows and 'Twitchforks' were raised when the Spaniard, on being asked by the BBC, if, despite being away from the sport, he is still as good as Lewis Hamilton, fellow champions, Sebastian Vettel and Kimi Raikkonen, not to mention the likes of Max Verstappen and Charles Leclerc, the Alpine driver replied: "No... I'm better!

Speaking in the wake of a qualifying performance the put him ninth on the grid, having out-qualified teammate, Esteban Ocon, Alonso was keen to clarify his earlier comment.

"I thought the question was 'are you as good as in 2018, when you left the sport?" said the two-time world champion. "The answer was, well I hope that I am better than 2018, because all the experiences maybe make me a better driver.

"It was not compared to Lewis or to Max or anyone," he insisted. "First of all it is difficult to compare and then they have dominated the sport for the last few years so I never meant to say that I was better than them."

"It does not sound right to me to sit here and say I'm the best," he told iNews, "but if others choose to do so that is okay with me. I have no problem with that.

"But it would be ignorant to neglect or forget the amount of talent that is out there and what other people can do as well, how hard they work, and sometimes, even if I don't like it, beat me when they are better. Then it's about how you react.

"Maybe I'm not as vain in general," he added. "I'm happy with my life and what I have achieved. I have made mistakes in the past, and admit that I have. But ultimately I don't think it has always been completely up to me. It is always a combination of things.

"It's not like I look back and say 'okay, this year I could have won the championship and I didn't'. In the past five, six, seven years it has been Mercedes at the top and if you wanted to win the championship you had to be in that car.

"Plus the combination obviously of Lewis. I'm not giving any discredit.

"What I am convinced of is that I can be among the best, be the best. I have proven to be that, but that does not give you a guarantee that you are the best every single day."