Alonso has no "clear target" 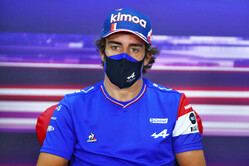 As he returns to F1 following an absence of two years, Fernando Alonso insists that he has "no clear target" of what he wants to achieve.

Earlier this week the Spaniard raised eyebrows when asked if he thinks he is as good as the likes of Hamilton and Verstappen, "I'm better," he replied, the two-time champion keen to throw the gauntlet down as early as possible.

However, speaking to the media on Thursday, whilst playing down talk about his age - at 39 years 8 months he is the second oldest driver on the grid - he was keen to make clear that he has not set himself a specific target for his return.

"What I want to do is test myself and try to help the team in this important moment of this transition from Renault to Alpine, and this great future I think this team has for the next coming years and the new set of regulations," he said. "I'm here to help the team with the experience and the knowledge that I may accumulate over the years and try to build a momentum into the team that can carry on from 2022 and into the future.

"We all love to win," he continued, "but there is only one that can do that every Sunday and at the end of the year only one can become champion, so that's a very difficult target to set.

"I will be happy and I will consider it a success if we grew up together - the team and myself - in the next coming years and we are a contender sooner rather than later."

With a nod to his comments earlier in the week, Alonso admitted that he may not be at the same level of performance as when he last raced in F1 in 2018.

"When I decided to come back I was trying to focus into the preparation," he continued, "not only physically but also technically being with a team for the second part of the season and trying to be up to speed in the F1 language, which is a bit more technical than some other categories.

"It takes time," he added, "and I'm not 100% up to speed yet... it is the same for many people I guess and for many drivers who have changed teams and some of them need to adapt a bit to the new aero regulations, the tyres.

"You will always feel more comfortable after five, six or four races so for me it is no different. I'm happy where we are now but I think in a couple races I will feel more comfortable even in the cockpit and the seat we are still make small modifications, better position, they are the things that we need to keep adjusting."

Referring to his age, he said: "You are trying to make your journey as fun as possible and as enjoyable as possible. At the same time you are working hard to deliver the results and to get those dreams that you have in your head.

"It's no different for me, trying to make this comeback a good shot at trying to win races or trying to be as competitive as possible but not with a clear target or a clear time set on things.

"So far I'm enjoying it and I know the repeated question is my age and my comeback but I'm a little bit surprised because I'm not that old... the world champion who is dominating the sport is 35 or 36 and it is not like I am 20 years older or something like that."