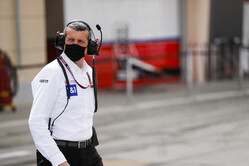 Whatever way you look at it, Mick Schumacher and Nikita Mazepin look set for a nightmare debut season.

The VF-20 was a dog of a car, while the under-powered Ferrari engine hardly helped matters. Consequently, other than the mandatory aero changes this season, the VF-21 is the same beast that Romain Grosjean and Kevin Magnussen struggled with.

In pre-season testing it was clear that everyone's worst fears were going to be realised, while the fact that there will be no updates as the team focusses on 2022 merely adds to the general feeling of despondency.

Indeed, asked, looking ahead to the season finale in December what he would consider a decent year for the team, it comes as no surprise that team boss, Guenther Steiner sets the bar remarkably low at a time everyone - bar Mercedes - is talking up their chances.

"I would hope that our two drivers have learned as much as possible and maybe even more than that in order to get ready for next year," says the Italian.

"If we can get a point or two at some stage, that would be a fantastic result," he adds. "But we are realistic, and points will be hard to come by.

"As long as we learn, we improve, and can get back to where we were in the past... I'm happy.

"It's going to be a hard climb this season, but we will get something good out of it, we always do."

Asked if the performance of the Ferrari power unit during testing was encouraging, he says: "For us it's very difficult to have a back-to-back with the power unit from last year. But I fully trust Ferrari in what they are saying to us as well as what they're doing. We can see on their car that it's better.

"For us, our testing was mainly focused on getting the two rookies as many laps as possible. We couldn't really do back-to-back as Mick, for example, was only in last year's car for one full day after Abu Dhabi, and Nikita only drove a Haas F1 car for the first time on our shakedown in Bahrain this year.

"I fully trust in Ferrari and I'm sure that the power unit is more powerful."

However, the Italian insists that it is not all doom and gloom.

"I think we've got a few things to keep us motivated through the year," he says. "We've got two young drivers that we need to develop, and we will develop over the year. That will come with some excitement, I'm sure of that.

"Then the light at the end of the tunnel is 2022 where we will be back at our full strength because we regrouped last year and we made a step back to make two forward."